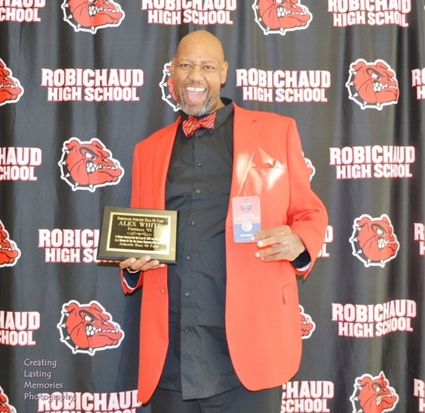 The Robichaud High School Athletic Hall of Fame is intended to honor the rich heritage and tradition of the great teams, individuals, and contributors to Robichaud Athletics throughout the years. It is with great pleasure to announce the new RHS Hall of Fame Inductees for the Class of 2018.

· Member of the 1990 Class B State Champion Football Team

. All State, All Suburban, All Area, All Metro, All City Football

· Discus Record Holder for over 20 years

· Rookie of the Year Basketball

· Member of the 1990 Class B State Championship Track and

Terry, being inducted for Track & Field, graduated from Robichaud in 1979. Three (3) consecutive years, he earned ALL STATE RECOGNITION in Track & Field.

· Served as co-captain of the 1979 State Championship Team

Graduated with a Bachelors Degree in Education from Central Michigan University

Began teaching at Robichaud in fall of 1966

She had a passion for teaching and influencing her students

· By providing a wide variety of activities in her gym classes, and because she had a keen eye for talent, Maxine Sandel Vrtis was able to alert and assist athletic coaches to recruit student-athletes.

She taught physical education and science for 36 years, and retired in 2002

Veronica, being inducted for Track & Field, graduated from Robichaud High School in 1978. A talented, versatile student-athlete, she participated in cheerleading, ice skating and was a member of the drill team.

· During the 1970's opportunities for Girls sports were limited

· In 1977, was the first Robichaud High School girl to become a State Qualifier, in any sport!!

· Ran a leg of the girl's 4 X 100m Relay, which established the first school record in that event.

Currently, Veronica Huguley Stephens is the first lady of the New Birth Baptist Church of Inkster, Michigan where her husband, The Rev. Joseph A. Stephens (a Robichaud graduate also) is Pastor. 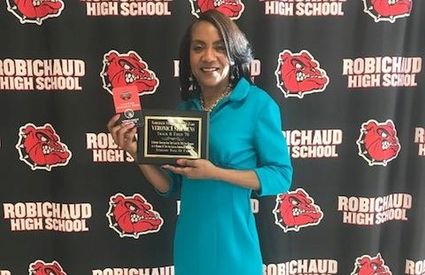 · In a single game, scored 60 points (v Crestwood), which tied the RHS record.

· For the season, shut-out five (5) opponents

· Prior to the MHSAA Play-off, attained a #1 ranking by the highest Detroit News.