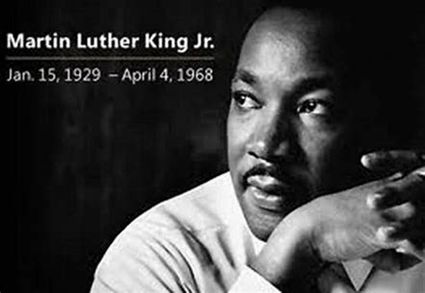 On April 3, 1968, Dr. Martin Luther King Jr. delivered his prophetic but inspirational "I've Been to the Mountaintop," speech at the historic Masonic Temple in Memphis, Tennessee.

One day later, the famous civil rights champion was assassinated.

While gunman James Earl Ray's bullet silenced the legendary leader, his legacy continues to live on through contemporaries like Rev. Jesse Jackson, Sr. and organizations like the NAACP.

Younger organizations, like Color of Change have picked up the mantle, pushing for justice, freedom and equality around the nation.

"In challenging political moments like this one, it can be tempting to give into despair, which makes it all the more critical for our communities to remember our powerful legacy and draw inspiration from leaders like Dr. King, especially now on the 50th anniversary of his assassination," Rashad Robinson, the executive director of Color of Change, the nation's largest online racial justice organization. "What people too often forget is that beyond inspiring speeches and letters, Dr. King held a deep understanding of strategy and an expert execution of his vision."

Robinson continued: "From the Montgomery bus boycott that brought a city and industry to its knees to leveraging media as a megaphone for the Civil Rights movements, every day at Color of Change we strive to learn from Dr. King's proud legacy and all those that stood with him. We hold corporations accountable and demand they do more than just steal Dr. King's voice for ads, but implement his demands for treating workers fairly and equally."

Robinson added that today, civil rights groups work to elect district attorneys around the country that are accountable to the community they represent and focused on ending mass incarceration.

"From the classroom to the ballot box to corporate boardrooms and capitol buildings, King's work to build power and change the rules is the legacy we honor as we create a next generation movement to make justice real," Robinson said.

The NAACP is honoring King with a series of special events in Memphis.

"As we join our spirit of activism with so many in Memphis for [a] march and rally, our overarching goal is to lift up Dr. King's legacy of active participation in our democracy," NAACP President Derrick Johnson said in a statement.

Joined by organizations like AFSCME, COGIC and a host of workers' rights leaders, the NAACP will commemorate King during a three-day event beginning Monday, April 2 in Memphis.

"The NAACP is proud that through the calendar of activities drawn from the striking sanitation workers' iconic slogan, 'I Am a Man,' we'll be able to connect the movements of the past with today's youth and movements for social change, while symbolically passing the mantle, and strengthening and energizing our Youth and College Division Leadership," Johnson said.

Meanwhile, Jackson who stood on that Lorraine Motel balcony in Memphis the day before the assassination said King's death redefined America.

The Rainbow Push leader and one-time aide to King recalled the "Mountaintop" speech in which King declared that, "Like anybody, I would like to live a long life...longevity has its place. But, I'm not concerned about that now..."

Jackson said that some people thought that King was anticipating his death the next day.

"He had just come from a plane which had been emptied, because of the threat of the plane being hit by a terrorist attack," Jackson said.

Jackson continued: "He was aware, but he felt that a coward dies a thousand times before his death, but the valiant taste of death but once. He refused to be afraid because of the risk of ambush and sabotage. He refused to stop what he was doing out of fear because he did it out of courage."

Dr. Wornie Reed, the Director of the Race and Social Policy Research Center within the College of Liberal Arts and Human Sciences at Virginia Tech University who met King during the Montgomery Bus Boycott and joined him on the historic 1963 March on Washington, said in a news release that there remain many myths about King.

"Many years ago, he would answer people who would say...Reverend King we can't legislate morality and he would say we 'are not asking for the government to make my neighbor love me, we are asking the government to keep my neighbor from killing me,'" Reed said. "So, King was dealing with real issues not the symbolic stuff that people talk about today."

In a tweet, Valerie Jarrett who served as senior adviser to former President Barack Obama, wrote about King's final speech and what it means to those who follow in his footsteps.

"Those who fight for social justice today stand on the shoulders of many, including Martin Luther King Jr.," Jarrett said. "I hope King's last speech will give you strength for the hard journey ahead."

King's daughter, Bernice A. King, tweeted that her father was a nonviolent practitioner, a social change strategist and a courageous speaker of truth to power.

King's tweet about her father continued: "And, when the truth he was speaking plus the work he was doing regarding economic justice, racism, war and poverty became too much for those in power to bear...#MLK50Forward #MLK."