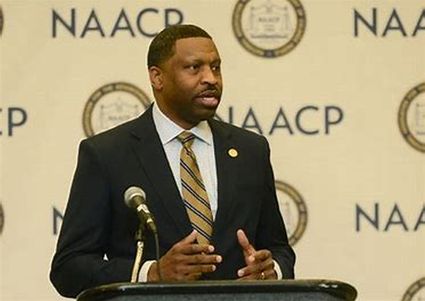 On the 50th anniversary of the assassination of Dr. Martin Luther King, Jr., NAACP President Derrick Johnson talks about Dr. King's assassination and the Kerner Commission."

-Report by the Kerner Commission, 1968

Fifty years ago, the nation was rocked by the brutal and public assassination of Rev. Dr. Martin Luther King, Jr. Eerily echoing the title of King's final book "Where Do We Go from Here: Chaos or Community?", his murder sent a powerful shock wave through the soul of America resulting in urban rebellions springing up in over 100 cities and placing the nation at a political and social crossroads.

As cities burned with rage at King's murder, most of America had already dismissed and forgotten the damning and prophetic report published only a month earlier by the presidential commission chaired by Illinois Governor Otto Kerner. Officially called the National Advisory Commission on Civil Disorders, the Kerner Commission identified systemic racism and poverty as the causes of the major Black rebellions in both Newark and Detroit the previous summer. The report warned that America was "moving toward two societies, one black, one white – separate and unequal" and offered concrete suggestions for confronting immediately this "deepening racial division."

However, the Kerner Report's recommendations for reconciliation and progress were never heeded; in fact, they were actively disregarded. Despite commissioning the report, President Lyndon B. Johnson went out of his way to suppress the spread of its findings. The consequences have been severe: "Whereas the Kerner Commission called for 'massive and sustained' investment in economic, employment and education initiatives, over the last 50 years America has pursued 'massive and sustained' incarceration framed as 'law and order,' while the 'war on drugs' has failed," says a new book, "Healing Our Divided Society," co-edited by former Sen. Fred Harris, the sole surviving member of the Kerner Commission.

Today, many of America's Black communities bear the sustained scars of physical and economic injuries. Even in Baltimore, the headquartered home of the NAACP, communities are still reeling from the police-custody death of Freddie Gray. The deaths of Black Americans like Michael Brown, Alton Sterling, and, most recently, Stephon Clark-shot eight times by police in his own backyard-remind us we are still not seen as full-citizens by many in our nation.

In our recent Economic Inclusion Reports on Baltimore, Charlotte and St. Louis-three cities impacted by protests and revolts linked to police violence and misconduct-the NAACP noted "similarities between the past economic realities of African Americans during Reconstruction and legalized racism and the current economic realities more than 150 years after the abolition of slavery and promise of freedom."

Our reports expose that African Americans are "still living in highly segregated communities and school districts, comprising the lowest median household income, highest unemployment rate, highest poverty rate, and ongoing barriers to the creation of small businesses." For example, the mid-2000 housing crisis caused by Wall Street excesses led to trillions of dollars in bailouts and the decimation of major portions of African American wealth-wrapped up in their foreclosed homes. This recession removed huge swaths of intergenerational wealth and many families have yet to recover.

As the leader of the oldest and largest civil rights organization, I recognize the temporal connection between America's past and present identities. Our country has let the pestilent wound caused by a continuing legacy of racism fester. This chronic condition is aggravated by the often-silent progressives who still cannot grasp the stark emotional reality of what partial freedom feels like to a full human being.

In his commencement address to Oberlin College in 1965, King said, "We must face the honest fact that we still have a long, long way to go before the problem of racial injustice is solved."

Half a century after Kerner's report and King's assassination, our government continues to perpetuate an unacceptable level of systemic and structural racism, which permeates our communities and fuels our protest.

As we remember King and Kerner, we will not do so in solemn reflection, but instead with resolve. We commit to making the social and political healing America has continued to defer become a reality. The progress for which NAACP members fight rings in harmony with the Kerner Commission's unapologetic condemnation of White America's failure to make democracy real for all of us.

Derrick Johnson is the president and CEO of the NAACP, America's largest civil rights organization. Follow him on Twitter @DerrickNAACP.