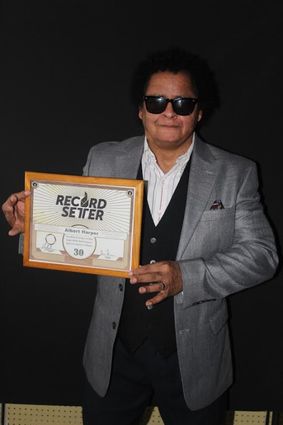 Albert Harper is a man who is known by more than the name he came into the Earth with. Some call him Crazy, others call him The Beast. But the title Mr. Harper is most accustomed to is the Exercise Bandit.

Harper is a River Rouge resident who is just as funny as he is fast. The Exercise Bandit is a man who's been around the country to promote health and physical fitness in the youth. He takes his job as seriously as a heart attack.

A fight that didn't go his way inspired Mr. Harper to take his physical fitness seriously. A quest for fame influenced him to take it all the way. Rigorous training and studying of Bruce Lee propelled Mr. Harper in the proper state of mind. He used a potato from his Mother's pantry to balance himself for push-ups. It went from there to unofficial and official world records, and countless media presentations. With his first being Channel 62 in Detroit.

The Exercise Bandit has graced Geraldo, Joan Rivers, and all of the local news outlets. He's been successful in spreading his message. The Bandit has performed at over a hundred elementary schools and over two hundred day care facilities. He's set to meet with Steve Harvey and Jimmy Kimmel later this year.

The legacy of the Exercise Bandit runs deep. His world records include forty five push ups on top of a brick with one finger, fifty push ups on top of a potato with one thumb, his most recent record is for the most push ups on raw eggs, while balancing an egg on a spoon in his mouth. Which he earned with thirty push ups. Harper played as a Power Ranger in the 1980's, and even won a Bruce Lee body contest. He's done fitness stunts with pop bottles, Ajax cans, VHS tapes, a bed of nails and even a three hundred pound man. I see why some people call him crazy.

Albert Harper proves that age is just a number and a state of mind. But he isn't alone on his journey. The sixty five year old man gives special thanks and appreciation to his graphic artist and uniform designer, Derrick Stewart. Who is the CEO of Street Teez. Harper is a wise and silly man, he only wants to see his people living long, healthy, and happy. He also wants to see a parade in his record breaking honor. I honestly think he deserves it.

I want to give a special thank you to Mr. Albert Harper for making an appearance to my office and telling me his story.

Jones - Where did the moniker Exercise Bandit come from?

The Exercise Bandit - I wanted to talk to kids about physical fitness but I needed an act. It was something I came up with in the 80's. It started with a bandana and a cowboy hat, but I didn't want folks to think that I was there to rob the joint. What put it all together was a scene of bandits in a western movie.

Jones - Why did you want to be famous?

The Exercise Bandit - My cousin, Tyrone Berkeley was in a group called the Magictones. He had made appearances on Soul Train and American Bandstand, and the family would go crazy when they saw him on TV. My father wanted me to take after him and work for Ford. But I wanted to do my own thing. And I did! 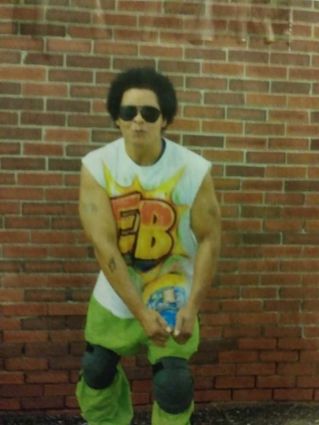 The Exercise Bandit - The first one! I was nervous, shaking like a leaf! But when I went home and saw myself on the screen I knew I made it!

Jones - What's your favorite part about being famous?

The Exercise Bandit - Proving all of my haters wrong, the ones who said I was never going to make it have to eat their words now. Signing autographs is always a rush! And having limousines to pick me up. People really treat you like you are somebody, and it feels good to be somebody.

Jones - What hobbies keep you going?

The Exercise Bandit - I like to collect action figure, I've been doing it for years. Staying fit is always at the top of my list. And educating everybody on the pleasures of physical activity.