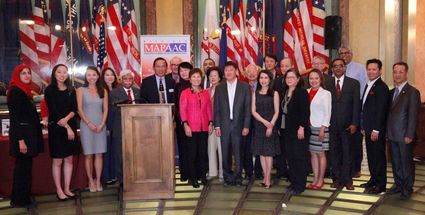 APA Day showcases the accomplishments and contributions of Asian Americans and Pacific Islanders in Michigan and the U.S. during national Asian Pacific American Month.

"I was thrilled to see the representation of the APAs from Southeast Michigan and West Michigan at our celebration," said Dr. Jamie Hsu, MAPAAC Chair. "We had more than 120 attendees visiting the Capitol today who took part in the recognition of the many contributions Asians and Pacific Islanders have made in our great state. We are very appreciative of the legislators, state officials, and residents of Michigan who celebrated with us today."

Remarks were given by:

The event included an introduction of the APA Legislative Caucus as well as, Sen. Hoon-Yung Hopgood presenting a resolution honoring Michigan's Asian American and Pacific Islanders.

Lora Painter, News anchor at WILX 10 was the master of ceremonies for the event, which included a cultural performance sponsored by the National Federation of Filipino American Association.