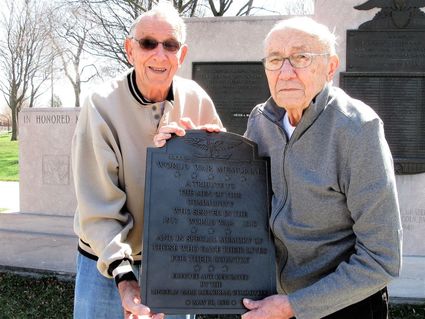 On May 30, 1938, the people of Lincoln Park dedicated the city's World War Memorial to honor those Americans who served or lost their lives in what was soon to be known as the First World War, commonly named "The Great War". The memorial's first location was in the grassy median in front of the city hall, and by the 1950s it had been relocated to newly- established Memorial Park on Fort Street. At that time, a permanent marble monument was erected to hold the memorials for the Second World War and the Korean Conflict. In the 1970s, a Vietnam War memorial was added to the monument. Five years ago, in the spring of 2013 the (First) World War Memorial plaque, made of bronze, was stolen from the monument and was never recovered.

A new World War Memorial is now to be dedicated, during the centennial year of the war's end in 1918. Having been procured with funds raised in the community by the Lincoln Park Historical Society, the new plaque is styled as the original in shape, wording and decoration. Instead of bronze, the new plaque is made of cast-aluminum with a bronze patina. (see photo)

The dedication takes place in Memorial Park on Sunday, May 20th, following the Lincoln Park Memorial Day Parade and during the city's annual Memorial Day public ceremonies. Memorial Park is located on Fort Street between London Avenue and Merrill Street. Parking is accessible on the streets east of Fort Street due to the parade route along Fort.

Pictured here with the new plaque prior to its installation are lifelong Lincoln Park residents Ed Pecsenye, Jr. and Art Jesue. Their fathers both served in the First World War; Edward Pecsenye, Sr. served with the U.S. Marines, 45th Co. 5th Regiment, and was gravely wounded in action at Chateau-Thierry/Belleau Wood in June 1918. Art's father, Panfilo Jesue, a native of Italy, first served with the Italian army at the start of the war in 1914 and after emigrating to the U.S. joined the U.S. Army where he served with the 32nd "Red Arrow" Division of National Guard units, seeing major action at several fronts in northeastern France. In the years following the war, the two veterans were among many who settled in the young community of Lincoln Park where they raised their families.