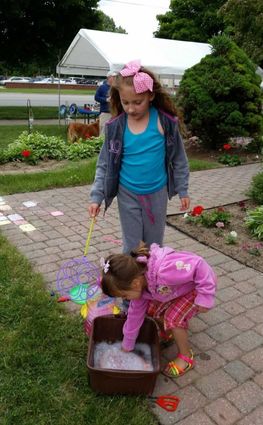 Janet Dey has been serving as cashier for Garden City Presbyterian Church's Annual Strawberry Festival since the event first originated 46 years ago. On Friday, June 15, Dey, now 96, will once again be ringing up local residents who partake in the church's community outreach event. The event is organized each year by the church's Presbyterian Women Organization.

The church's annual festival, which has been a success every year since it began, has allowed the church to assist wherever there was a need. Initially, the church donated proceeds from the Strawberry Festival to various humanitarian organizations or to church mission work. But in 2016, the church's pastor, the Rev. Ruthanne Herrington suggested the funds might be spent on a need closer to home. Herrington had been speaking with Garden City Fire Chief Catherine Harman, who mentioned that funding for the department's smoke detector giveaway program had been depleted. The fire department had been in the practice of giving away smoke detectors to city residents in need at the department's annual open house.

In the fall of 2016, the church's first donation went to the Garden City Fire Department as 96 smoke detectors were purchased. The following year, the church donated $1000 to the fire department especially for this purpose. Recognizing the need as an ongoing one, Herrington asked the Presbyterian Women group to consider designating proceeds from the annual festival to the fire department's program on a yearly basis. The women agreed that putting the proceeds back into the Garden City community by way of providing working smoke detectors to residents would be a proper use of resources.

Fire Chief Harman recounts an incident two years ago in which an elderly man perished in a house fire in the city. "There's' nothing worse than going into a house, finding someone deceased and not knowing if a fire detector would have made a difference," she said. Harman says the fire department is thrilled the church is helping purchase smoke detectors due to city budget constraints. She adds that members of the city's fire department will be attending the Strawberry Festival and look forward to interacting with the community.

The church is heavily invested in the Garden City community through food pantry programs, holiday baskets and family events for the residents. Church leaders have recently reached out to the city council and the school board to see if any other community needs exist in which it may be of assistance. Church member, Susie Flynn says, "We do a lot of outreach here."

The 46th Annual Strawberry Festival will be held Friday, June 15 from 5 to 8 p.m. For a cost of $5.00, attendees receive cake, ice cream and plenty of strawberry topping. Women in the congregation will be preparing fresh strawberries the evening before the event.

To round out the event, the church will have a craft booth, a baked goods booth, face painting, children's activities and a disc jockey. Garden City Presbyterian Church is located at 1841 Middlebelt in Garden City. Inquiries can be directed to the church office at 734-421-7629 or to gardencitypresbyterian.org.

Any Garden City resident in need of a smoke detector for their home may contact the fire department at http://www.gardencitymi.org.