BOOKS IN THE HOOD REVIEW An Unkindness of Ghost 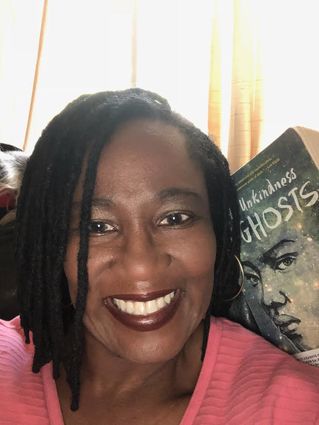 Special Books In The Hood guest. Ecorse native and my Auntie Beverly Jones

An Unkindness of Ghost is the debut novel from author Rivers Solomon. Released by Akashic books October of 2017. An Unkindness of Ghost was a finalist for the 2018 Locus Award for First Novel, winner of the CLMP Firecracker Award in fiction, the novel has just as many accolades as a hand could hold fingers.

The HSS Matilda is a ship that's floating through the cosmos for years on a quest for God's holy land. No matter how noble the journey may seem, the bowels of Matilda are ran with hatred and greed. The ship is seperated by race, gender, and class. Social mobility is a foreign and beyond subject. If you're born a peasant your going to die a peasant's death.

Aster serves as hero and herotic. She starts the story performing a life saving medical procedure on a fellow Matilda dweller. It's clear Aster is a genius, and a leader among the colony of women who slave in the field decks of Matilda. Her spare time is spent in a secret laboratory where she makes healing solvents for the residents.

Her second job is working as the apprentice to Theo. Matilda's Surgeon General and second in command. His dictator uncle was crowned ruler after his father's death. Theo is a polio survivor that has experienced two sides of the ship. On the outside he's is a healthy man of God. But inside there's a tug of war with his identity, a forbidden love for Aster, and the status of Matilda.

Aster and her best friend, Giselle discover a glitch in Matilda's operating system. A glitch found by Aster's mother Lune, who died giving birth to her twenty five years ago. The ultimate prices are paid for the pair to crack the code.

Despite the brutality of the higher ups, and the most foul treatment I've read in a book so far. Aster accomplishes her mother's mission with her best friend at her side.

Solomon Rivers pens readers an Afrofuturist trip through oppression, mental illness, discrimination and sexual assault. Proving the madness of human beings stretch further than the confines of this Earth. All while handing out a free science lesson, and teaching a bigger understanding of sexuality and the LGBT community.

Though currently based in Cambridge, UK, where they live with their family, Rivers is originally from the United States. There, they received their BA in Comparative Studies in Race and Ethnicity from Stanford University in California and an MFA in Fiction Writing from the Michener Center for Writers at the University of Texas at Austin. They grew up in California, Indiana, Texas, and New York but spent much of their childhood wishing the mothership might come save them. Their literary influences include Ursula Le Guin, Octavia Butler, Alice Walker, Zora Neale Hurston, Ray Bradbury, Jean Toomer, Doris Lessing, and countless more.