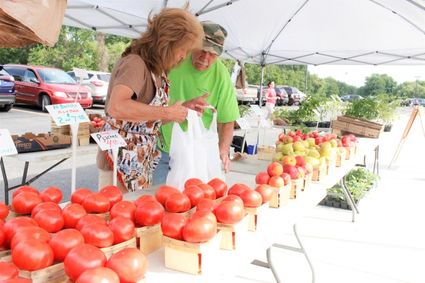 Farmers' markets in general have enjoyed an increase in popularity as the American consumer seeks out that "close to home" feel. Consuming goods which were produced miles away and took days to get to the local market has some shoppers finding that great quality products can indeed be right in your own back yard.

Brookellen Swope says people want to be healthier and are becoming more conscious about what they are eating. Swope, who is president and CEO of the Westland Chamber of Commerce, says social media and the news also play a role. Hardly a week goes by without a news warning breaking about another foodborne illness outbreak or the dangers of pesticides on food. "Farmers' markets make it real easy to find out where it's coming from and what you're eating because you see the farmer right there," Swope says.

The Westland Chamber of Commerce has been responsible for managing the Westland Farmers' and Artisans' Market for the past five years. The event is held each Thursday afternoon from 3 to 7 p.m., May through October. The market, which began in 2009, had been held in previous years at city hall and then a shopping mall parking lot. In 2014, the city unveiled a new pavilion as the market's new home in Central City Park on Carlson south of Ford Road. Swope says the event has since grown larger every year and has seen an increase in both vendors and shoppers.

What does the Westland Farmers' Market have to offer? "Just about everything," says Swope. "There's something for everybody there," she adds. Vendors peddle their wares, which include items such as soaps, candles, baked goods, handcrafted items and, of course, plants and fresh produce.

The Westland Farmers' Market honors food assistance programs such as WIC, Bridge Cards and Senior Fresh. Credit cards are usable at the farmers' market also. Workers at the Market Manager's Table will scan food assistance or credit cards and provide shoppers with the requested amount in market coins, or tokens. Swope says the tokens function like Monopoly money and never expire. Vendors will gladly make change whenever necessary. She adds that the market began accepting credit cards and offering market coins because so few people actually carry cash anymore. "I call it the farmers' market ATM," she says with a smile. "We try to make it easy for everybody."

As an added incentive, the Westland Farmers' Market is participating in the Double Up Food Bucks Program, which allows Bridge Card holders to obtain an additional dollar in market coins for each dollar of market coins they purchase. The program is being promoted by the Michigan Department of Health and Human Services (MDHHS). Participants are allowed up to twenty dollars' worth of Double Up Food Bucks and are redeemable towards the purchase of Michigan-grown produce only. 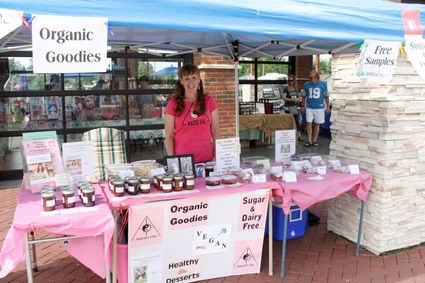 As the Westland Farmers' Market is being held in a park, there are play areas and a splash park nearby. Among the 35 vendors at the market are food vendors, so a great evening out for the family can include shopping, dinner, play and dessert. Entertainment is also on the agenda each week. Local band Benny and the Jets make frequent appearances. Upcoming events at the market this summer include a Kids Day on July 12 and Seniors Day on August 9.

The Westland Farmers' and Artisans' Market is held at 1901 N. Carlson, between Ford Road and Marquette. The market is held on Thursdays from 3 to 7 p.m. through October 11. For more information go to the market website at http://www.westlandfarmersmarket.com or call the Westland Chamber of Commerce at 734-326-7222. The market also has a Facebook page; http://www.facebook.com/westlandfarmersmarket.