I Have a Purpose Summer Youth Conference 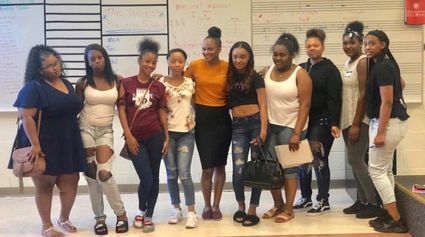 Girls talk self love, confidence and friendship at the youth conference

Jayila Washington walked across the stage of River Rouge High School in 2012. The years have been kind and the work has been harder for Ms. Washington. In 2018 the city girl earned her Bachelor's Degree from Harris–Stowe State University in St. Louis Missouri.

Jayila left home on a mission to return a better, more matured version of herself. She learned lessons along the way that weren't exclusive to a classroom. Life defining moments that she had to overcome alone, due to the her family still being in Rouge.

While in St. Louis, Jaylia crossed paths with many teenage girls who faced the issues she's already been through. Jaylia felt like the girls needed somebody they could relate to, someone who's been there before. So the problems troubling them as teens won't demonize them as adults. From there, Ms. Washington created the Blossoming Ladies Mentoring Group. The goal is to show the ladies they are better than their circumstance, and that they are the masters of their own destiny.

Jaylia plans on bringing her talents and connections back home very soon. The Blossoming Ladies Mentoring Group will be helping the residents of the River Rouge Area. The I Have A Purpose Summer Youth conference was one of the program's first introduction to the hood. Students from all over came to River Rouge High School to check out the vendors and youth workshops.

There were giveaways of money, scholarships, and hair bundles for lucky young ladies who wanted to get fly. Detroit rapper Snap Dogg made an appearance, Consuelo's Customs crafted a storm and the conference was finished with a dance showcase. The conference had a great turn out for this to be it's first year. Jaylia is already working on how to make it better for next year.

In between her speaking engagements and running around I was able to catch up with Ms. Washington for some questions.

Xavier Jones - How did the Blossoming Ladies Mentoring program come to life?

Jaylia Washington - I was working in youth homes, and noticed the younger girls going through the same issues I went through. I wanted to use my experiences to pay it forward to them, so the girls would know they're not alone. I was teaching them how I got through it and how to move forward.

Xavier Jones - What's next for the program?

Jaylia Washington - I'm moving it back to our community. We're sticking with the education of sexual assault and alcohol and drug abuse. I also plan on opening up a girl's home within the next year.

Xavier Jones - Do you feel like there were any programs like this when you were growing up?

Jaylia Washington - I do not! That's one of the reasons I want to specifically place the program in River Rouge. We're small but there's alot going on that I feel like I could change.

Xavier Jones - What are your expectations for this conference?

Jaylia Washington - I want the kids to leave with a sense of security about themselves. A grasp on their insecurities and a boost in their confidence levels that would go with them into adulthood.

Xavier Jones - What is your end goal?

Jaylia Washington - I want to make a change in the world, but more importantly in my community. I want to leave a mark on the youth and the issues they face away from school.

Xavier Jones - What advice do you have for someone in your shoes?

Jaylia Washington - Be passionate, if you are not passionate you should find something else to do! It's not just a job! This isn't about you, or your success. It's about the people you are helping.