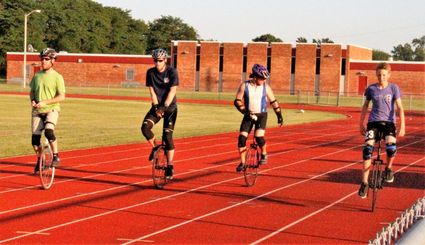 It started out in 1975 as a group of 15 neighborhood teenagers who just enjoyed riding unicycles. They encouraged and challenged one another and were chauffeured by parents, Tom and Carol Brichford out to the Pontiac Unicyclists Club on weekends. The group decided to check out the North American Unicycling Convention and Championships being held that year in Pontiac. They returned to their hometown inspired to be one of the best teams in unicycle competition. As interest in unicycling grew, the Brichfords found they were unable to drive everyone out to Pontiac on a regular basis. In 1976, they formed their own club in Redford and organized practice sessions.

The club has grown and now boasts 138 members. No longer are youngsters the only members. Riders of all ages are involved and there are several families with three generations in the club's membership roll. Most new members to the club come with an interest in learning how to ride a unicycle. Beginners' classes are offered only once a year, in January for eight weeks. Beginners who want to learn but don't own a unicycle can use one belonging to the club to learn on during the class. Club members will gladly offer advice to any new member when it comes to purchasing a unicycle of their own.

Members in RTUC are required to pay annual dues and maintain an active standing in the club by attending practices at least once a month and attending two money-making performances or parades per year. Saturday practices are held either in Redford, Dearborn Heights, Livonia or Garden City, depending on gymnasium availability. During the fall and spring, weeknight practice sessions are held also.

As for the upcoming Convention and Championships, unicycle events include Cyclocross, which features laps and simulates mountain biking. There will also be events in distance, or racing, jumping and freestyle. Muni, short for mountain unicycling will be held on the mountain biking trails at Maybury State Park. The public is welcome to come and watch. There will be no admission charge to the events. Please be advised, however, that non-club members and non-participants will not be allowed to attempt to ride a unicycle. A complete schedule of events and their locations can be found at http://www.naucc2018.com. 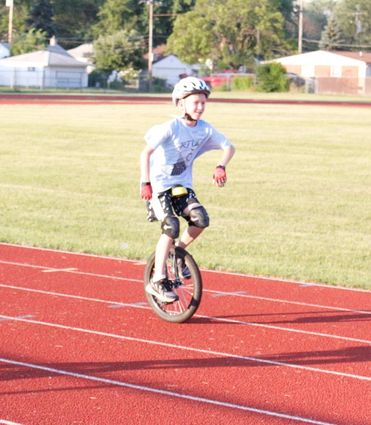 One of the young riders practice for competition

Club member, Richard Tharrett says the RTUC will have 50 members competing. In total, roughly 200 competitors from the United States and Canada will attend the event.

How many competitions have the RTUC won through the years? Carol Brichford says, "I wouldn't hazard a guess." Awards can be given for competitions as an individual, group or club, or for performance in a parade. "We probably have 40 trophies in the garage," says Brichford, "but they don't hand out trophies anymore, thank goodness, because the garage can only hold so many."

The Redford Township Unicycle Club can be reached at http://www.rtuc.org. Their website features videos and information for prospective members and interested people.