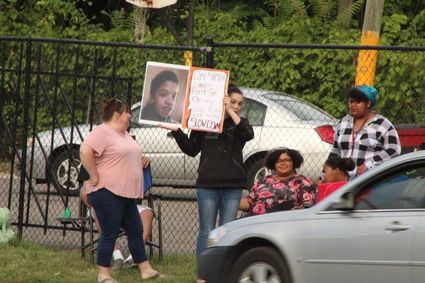 The family of Brandon Starks participate in protest where he was killed crossing Fort.Street in Southwest Detroit

Citizens of Southwest Detroit are fed up with the traffic that dangerously speeds up Fort Street everyday. The community gathered on a busy Fort Street to hold host a protest that would build awareness, and demand a solution to the problem. The Michigan Department Of Transportation stated the community could inquire a speed study. But the proof was in the pavement.

The demonstration was slated to be silent, but the point was made loud and clear. It was hard . Protesters had to guide elderly citizens and children across traffic to reduce the chances of having more victims on our hands.

In April, eight year old Brandon Starks was killed in a hit and run accident. The young man lost his life trying to cross Fort to get to Kemeny. This could happen to anybody of any age and the people are concerned.

Let's cross our fingers and hope the city will implement a change. A lower speed limit, or a stoplight, anything that will protect the safety of our youth.

Dr. Leonard, Ed.D. A orginizer of the movement penned this statement to the Telegram.

The protest was successful because our presence highlighted a serious safety issue for pedestrians of all ages.

During our demonstration, there were children and handicapped adults who needed our assistance crossing to Kemeny Recreation Center; from the east side of Fort Street to the median and from the median to Kemeny.

There were many cars exceeding the posted 45 mph speed limit which is unconscionable near a playground.

In speaking with State Representative Stephanie Chang, I understand Michigan Department of Transportation (MDOT) representatives have indicated a traffic study needs to be conducted to remedy the traffic situation. Not only is crossing from the east to the west side of Fort a challenge for pedestrians heading to Kemeny. But also bus riders have had a safety issue crossing Fort Street for years because the drop off location is close to Schaefer which is a right turn on red.

Rerouting the Interstate 75 traffic has exacerbated an already safety issue. The traffic pattern or flow seems to be focusing on moving traffic without equal consideration for pedestrians.

There are three traffic patterns driving on Fort Street in our community. There are Fort Street drivers heading south, Schaefer Road drivers turning on red at Fort and Interstate 75 drivers exiting the freeway onto Fort Street turning right.

As I stood on the median last week, I realized there is a traumatic difference between driving on Fort Street even at 35 MPH and attempting to cross on foot. I wondered if parents understood the serious danger our children face trying to get to the playground. I felt intimidated by the cars. 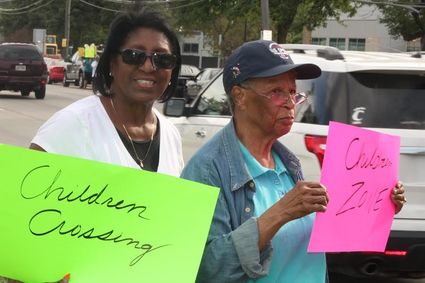 I am interested in knowing the strategy MDOT used that did not factor in a children play zone.

MDOT representatives have agreed to meet with the community on Thursday, July 19, 2018 at 6pm at SS Andrew and Benedict Catholic Church , 2430 S. Beatrice, Southwest Detroit 48217. Their presentation will be an agenda item during the regular Original United Citizens of Southwest Detroit meeting.