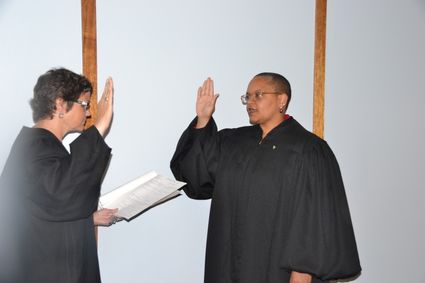 The 34th District Courthouse, located in Romulus, is a busy one. Close to 150,000 people are served by the courthouse each year, as the 34th District handles legal business for Romulus, Belleville, Huron, Sumpter, Van Buren Township and Detroit Metro Airport. Construction is currently underway on the construction of a new courthouse, expected to open in August 2019. A larger court building means expanded services for residents.

Following approval from the city of Romulus, the court appointed a new part-time attorney magistrate, Lisa Martin, of Van Buren Township. Martin's appointment means an additional presence of the district's bench. Martin is eager to serve the public and brings with her 20 years of legal experience.

Martin was born and raised in Detroit and attended Cass Technical High School. She is the second of three daughters. Her mother worked as a school teacher and her father was a prison warden. "I tell people that's kind of why I am the way I am, in terms of being disciplined and having a strong work ethic," she says of her parents' influence.

Martin earned a Bachelor of Arts in Psychology at Harvard University in 1994, and earned a Juris Doctorate degree from the University of Michigan Law School in 1997. She knew from childhood that she wanted to be an attorney. She cites her aunt, former Corporate Counsel for the city of Detroit, Nansi Rowe, as the inspiration that propelled her to enter law school. As a young girl, Martin accompanied her aunt to work on numerous occasions and was amazed at the respect her aunt received from all who encountered her.

Beginning in 1999, Martin worked for two years at the Legal Aid and Defender Association in Detroit. She knew she wanted to do public interest work and found it satisfying to assist low-income residents in a time of legal need. She says of her time working there, "It was exactly what I needed at that time." She also found that the work she was handling at Legal Aid was an experience she could share with her beloved aunt.

Martin began her work in the 34th District Court early in June. Though she has been on the job a short time, she says it has been a wonderful learning experience so far. She finds that taking notes and reviewing all that is done in the courtroom helps her to get a feel for the demands of the job. "I want to make sure I'm doing exactly what I'm supposed to be doing," she says. She adds that because her position is part-time, it allows her to learn and become comfortable in the position. Since the job is in Romulus, the location is ideal, because for Martin, family ties are strong. Her sisters and other family are nearby and time with family is important to her. 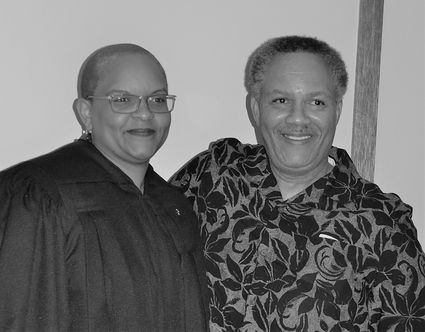 Lisa Martin with her father at the swearing in

Martin feels as a magistrate with the 34th District Court, she is still helping the community, but in a different sort of way. She possesses an enthusiasm for helping people understand the legal process and attaining access to it. While working with Legal Aid in Detroit, she found that the area's poor literacy rate was a hindrance to many in understanding just what their legal issue was all about. She says if people have poor reading skills, they cannot fully understand the legal process or how to use it to their own benefit. She says it is important that people get their day in court and have access to legal representation.

How would Martin like to be remembered in the future? She says, "I think of myself as a thousand little stories of 'she helped.'"