Clowns Around Redford Give Back to the Community 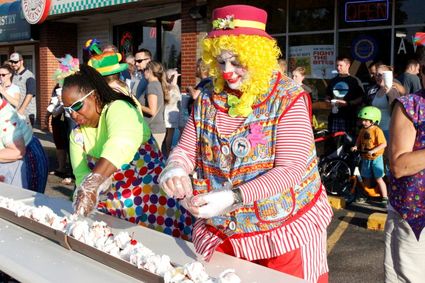 All the world loves a clown," said American songwriter, Cole Porter. But what does the clown think about it?

Nancy Opatich, aka "Bubbles" the Clown, may have the answer. Opatich currently serves as president of Clowns Around Redford, a club for those interested in the performance art of clowning. A retired state employee, Opatich has been clowning for more than 30 years. She uses her talent in her community, performing at charitable events, nursing homes and hospitals. In addition, Opatich is an esteemed member of her profession. She is a member of Midwest Clown Association's Clown Hall of Fame and has also achieved the association's Lifetime Achievement Award. It's a funny business, but it's also a serious business.

On August 4, members of the club over which Opatich presides, Clowns Around Redford (CAR), partnered with the owner of Vicky's Homemade Ice Cream in Redford to create a 50-foot long banana split. Tickets were sold for five dollars each, which allowed the ticketholder to partake of the frozen creation, complete with three scoops of ice cream strawberry and chocolate topping, bananas, and you know the rest. The event is hosted every summer by CAR and is the capstone event for National Clown Week. Proceeds benefit Redford Interfaith Relief, a local food assistance program. Redford Interfaith Director, Sue Pherson is delighted with both the contribution to the organization and the spotlight the event shines on their program.

CAR members have in the past participated in downtown Detroit's Annual Thanksgiving Day Parade, as well as other local parades celebrating various holidays throughout the year. However, such performance gigs are non-paying and participation is done mainly for the joy of performing. Paying gigs are rare and are limited to the occasional birthday party or event paid by a club or organization. The Golden Age of the Big Top is gone and clowns are becoming a rarity. Films such as "It" about a shape-shifting, homicidal clown don't help the situation. Opatich concedes membership in CAR has dwindled in recent years. But that doesn't mean she'll be hanging up her curly yellow wig anytime soon. 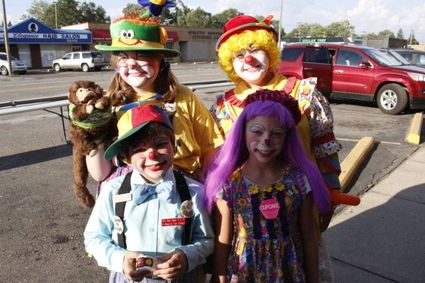 (Clockwise from left to right) Twinkletoes, Sprinkles, Cupcake and Giggles help out at a charitable event in Redford.

Opatich is helping to propagate a new generation of clown performers. As older performers are dying, Opatich says it's important for a new collection of clowns to keep the profession alive. She regularly mentors young people who aspire to become clowns. Instruction includes makeup, magic tricks, balloon

twisting and skits. Opatich says special training is necessary in order to take clowning into a children's hospital. The goal here, she explains is to get the child to laugh and forget about being ill. Opatich calls it having a "clown's heart," or the desire to simply make another person smile. She adds that a person must have a passion inside them in order to do well at clowning. "When you get that smile, you know you've touched that child," she says. "I love kids."

Opatich enjoys teaching and plans to offer more classes in clowning at CAR. Why do people like clowns, anyway? "I think they like to laugh," Opatich says. Opatich can be reached at clownsaroundredford.wordpress.com.