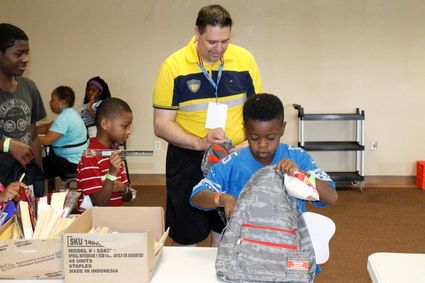 nkster students preparing to return to school in a few weeks got a bit of help with school supplies from an annual community event called Episcopalooza. The event was billed as a back-to-school carnival and was held Saturday, August 18.

Episcopalooza is a ministry of the Episcopal Diocese of Michigan and was brought to the Inkster community through the efforts of the Rev. Ellis Clifton of St. Clements Episcopal Church in Inkster. The diocese sponsors the event, rotating the location each year. When the event came to Inkster this year, Clifton wanted to make the event more than just a church festival. He approached Inkster City Council about making it a community-wide event.

The Inkster Task Force is a service organization focused on education, health and financial literacy and became interested in the project and offered its assistance. It was decided that rather than holding the event at St. Clements Church, to hold it at the Booker Dozier Recreation Center on Middlebelt in order to truly make it a community event. Clifton credits the Inkster Task Force with bringing the community organizations together to make the event a success. Organizations such as the Western Wayne Family Health Centers and Zaman International, to name a few, set up information booths at the event.

The event also featured bounce houses, games and prizes, free food and a backpack giveaway. Inkster's First Responders attended also, giving their time and allowing children to sit in patrol vehicles. Clifton added that the event was intended for Inkster residents only, yet no one was turned away.

Eric Travis is the Missioner for Youth and Young Adults with the Episcopal Diocese of Michigan. He explained that students were given a "passport" which required them to have each logo on it stamped by the attending organizations, or community partners. When filled, the "passport" was exchanged for a wristband which allowed the student to select a backpack and school supplies. Travis says the goal was

community engagement, not merely handing out school supplies. "It's about relationships; it's about bringing the community and people in the community together."

Inkster City Councilman Steven Chisholm attended the event also. As a member of St. Clements Episcopal Church, he represented both the church and the city at the event. He said the event was a huge success. "I think it's bigger than we may have expected," he said. 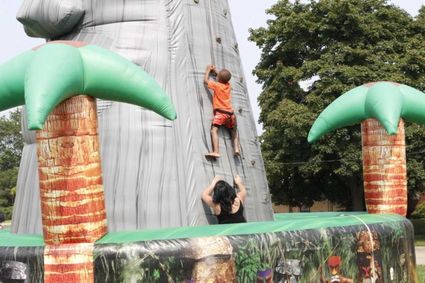 As the focus of the event was back to school, staff members from the Inkster Preparatory Academy were on hand to inform residents about the school and what it offers. The school is a tuition-free K-5 school of choice. Principal Shawn Hurt says the school is the highest academic-achieving school in Michigan and is concerned with providing a quality education. The school will sponsor an Open House on Wednesday, August 30 at 6 p.m. For more information please call 313-278-3825.

The event brought awareness to the community and gave away more than 1,000 backpacks, along with school supplies like pencils, notebooks and crayons. "I am thrilled by this," Travis said. "It's been a wonderful partnership."

Rev. Clifton summed it up by saying, "We're seeing a lot of those divisions that were in the city begin to crumble as all of us are working together in a much greater way than we have been." The Inkster Task Force can be reached at [email protected]