Let there be light on Ecorse football field

Ecorse Community High School kicked off its football season with a win against Delta Prep Academy. Not only did they win the game, the school district scored big with the new lights at Jim Bibbs Field. The field now has new, state-of-the-art energy-efficient LED stadium lighting and can boast that Friday Night Lights along with other schools in the region.

The Ecorse district recently partnered with Johnson Controls to implement energy conservation measures that helped to save money and use the money for upgrades within the district. and address deferred maintenance across school facilities to deliver a sustainable and modern learning environment for students and teachers.

Dr. Josha Talison, Superintendent of Ecorse Public Schools says there will be new HVAC systems throughout the district and many other upgrades and it isn't going to cost the residents any money. The funds will come from savings from the upgrades designed by Johnson Controls.

David Peters, Vice President and General Manager, Performance InfrastructureTM, North Region, Johnson Controls said during his first meeting with Dr. Talison, he mentioned that the district didn't have any money. That didn't pose a problem for Peters. He and his team at Johnson Controls went to work and came us with some energy efficient changes that would net the district enough money to do $3.1 Million of district-wide infrastructure upgrades as well as lights for the stadium. 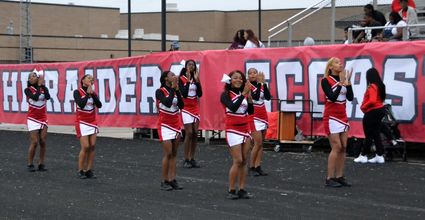 Principal Kenneth McPhaul says that they have been trying to get the lights for over 14 years. He is thankful for everyone and their support.

There was a sea of red and white in the stands and around the football field as the community came out to participate in the first home football game. That Red Raider spirit helped to encourage the team as they came from a 0 – 7 deficit in the first quarter to win by 21 – 7.

During half time they held a ribbon cutting ceremony where Dr. Talison presented each of the School Board members with a plaque and a bouquet of flowers.