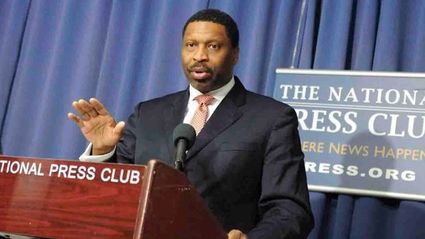 BALTIMORE – NAACP, the nation's foremost civil rights organization, is looking to mobilize personal networks, activists and supporters to energize its base ahead of the 2018 midterm elections on November 6.

"Our lives are on the ballot this year, so it is absolutely crucial that African-Americans as a whole participate in these midterms elections at rates that reflect our true voting power," said NAACP President & CEO Derrick Johnson. "Today on National Voter Registration Day, we're urging everyone to use their power to register and mobilize new voters and get involved in one of the most important election in our nation's history."

President Johnson's statement echoes the urgency of NAACP's message for voting this year. The increase of brutal #livingwhileblack incidents, the continuous stream of hateful rhetoric, disrespect and racist policies coming from the White House, all point to the notion that Black lives, civil rights and the issues of communities of color matter less and less to the President and elected officials in our nation. The NAACP recognizes this threat and is engaging voters based on the all too real idea of "Vote! Our lives depend on it."

At the very core of the campaign is a radical voter registration and mobilization tactic utilizing social media platforms and personal networks. Fifty-five days out from election-day, NAACP launched the Power of 5 challenge, asking people to tap into the concept of relational organizing. Enlisting the help of top tier celebrities, civic leaders, artists, elected officials and everyday heroes, NAACP used a portrait and PSA series to task people to engage their own networks by registering 5 people to vote, volunteering for 5 days between now and the election, and sharing the message with 5 friends.

"The most important player in this year's election is the individual, said Jamal Watkins, NAACP Vice President of Civic Engagement. "Our recent poll showed a majority of voters of color and nearly all Black women felt disrespected by President Trump. People of color also believed this president has set back race relations and these numbers will play a role in both how and why they'll vote in the midterm elections."

The NAACP voter mobilization efforts includes the activation of its over 2200 branches across the country and key on-the-ground strategic initiatives in Florida, Georgia, Ohio, Michigan, North Carolina and Pennsylvania. It will engage faith partners, community leaders and other social justice organizations, and will serve as a catalyst for NAACP's five-year civic engagement plan.

"This campaign is about the power of our personal networks to mobilize voters and to ensure that no elected officials can feel comfortable in disrespecting our communities or taking our votes for granted," added Watkins.

Founded in 1909, the NAACP is the nation's oldest and largest nonpartisan civil rights organization. Its members throughout the United States and the world are the premier advocates for civil rights in their communities.