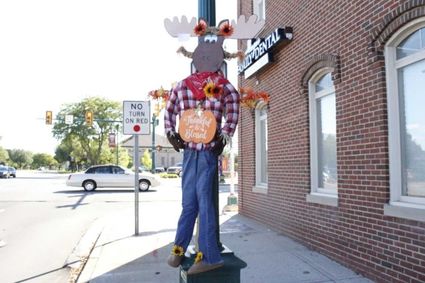 Pumpkins, scarecrows and harvest time all go together at this time of the year. The city of Wayne will be giving scarecrows the center stage at this year's 6th Annual Scarecrow Show being held in the downtown area.

Each year, community members participate in the event by creating, designing, and dressing up a scarecrow. Frames which hold the festive figures are provided by the organization Wayne Main Street, which also promotes the event. Both individuals and organizations participate each year. Scarecrows can be embellished to resemble pirates, witches, or celebrities. They can even be decorated to reflect a business, an organization's mission, or a theme. The event is also a contest, and although registration is closed, residents and visitors to Wayne's historic downtown area are encouraged to vote on their favorite Scarecrow.

The 2018 Scarecrow Contest winners will be announced on Wednesday, October 17 at a reception hosted by Wayne Main Street, where in-person voting will take place. Cash prizes will be awarded. The reception will be held in Derby's Alley from 4 to 7 p.m. and will include live music, The Heavenly Hot Dog vendor truck, and cider and donuts from Dexter Cider Mill. The first 150 attendees who cast a vote for their favorite scarecrow will receive a free hot dog. Wayne Main Street's board president, Juan Bradford says, "Our goal with the Main Street Scarecrow project is to bring our community together for a fun, family-friendly activity." The event is free of charge and open to the public.

Voting will also be taking place on Facebook beginning October 1. Go to http://www.facebook.com/WayneMainStreet/ to vote.

Cash prizes will be awarded to the top vote-getters in three categories: the Facebook voting contest, the Judge's Choice, and the in-person voting taking place at the reception on October 17. Cash prizes are courtesy of Kurt's Caps, dealer of truck accessories and merchandise. Executive Director of Wayne Main Street, Maxwell Cameron says, "We receive a lot of support from our local business community for this project." Cameron adds that the participation and financial support received from local businesses has allowed the Scarecrow Show to grow bigger each year, since 2012. He adds, "Wayne Main Street would like to thank the DTE Energy Foundation, the Dexter Cider Mill, Kurt's Caps, and Michigan Realtors for their sponsorship of the 2018 Scarecrow Contest and Reception."

Scarecrows will be on display in the downtown area on Westbound Michigan Avenue and Wayne Road between Glenwood and Michigan Avenue. Each scarecrow will wear a placard stating the organization or family name. Rose Bowyer, a resident of Wayne for more than 15 years says, "I like them. I like to see them every year." The display will run from September 29 through November 3.

"This project is an amazing community activity that truly brings our community together," says Angie Jarman, Wayne Main Street's Scarecrow Show Organizer. "Each scarecrow really adds to the unique feel of Wayne's historic downtown." Jarman expects more than 70 scarecrows to be on display.