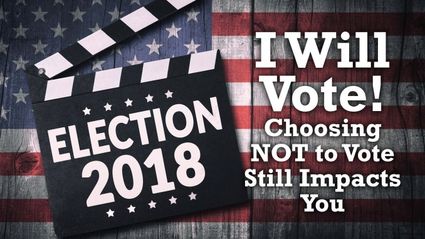 That is such an empowering statement, when you think about it, especially considering how important voting is for Black people at this critical time in this country.

The voting rights of Blacks are being targeted and threatened every day and those threats have become extremely rampant over the course of the last several months leading up to these important midterm elections in a few weeks.

Early voting has begun in several states and the shenanigans have also increased. There have been a number of reports coming out across the country about voter disenfranchisement and voter suppression tactics that are negatively impacting African Americans, and it is startling.

In Georgia, for instance, Secretary of State Brian Kemp, who is also running for governor against Democratic opponent Stacey Abrams, who is African American, has been hit with a federal lawsuit after being accused of hampering minority voters from registering prior to the midterm elections on November 6. This is troubling, especially because Kemp is running for governor, while holding the office responsible for handling the important process of voter registration.

According to reports, Kemp's office put approximately 53,000 voter registration applications on hold because of minor discrepancies, and although Blacks make up roughly 32 percent of Georgia's population, approximately 70 percent of the applications in Kemp's office that were placed in this voter registration pending status were those of Black applicants.

The issue of voter disenfranchisement, voter intimidation and voter suppression is not new, just like protecting the voting rights of African Americans has been an ongoing fight for centuries and one that cannot be ignored. Voting matters. Voting makes a difference.

After the Civil War, Black men were elected to the U.S. Congress and the South even elected some Black senators. These political gains and the progress made by Black people as a result of Reconstruction governments in the South, empowered many Blacks financially and socially.

It is impossible for Black people to be disengaged politically, and then hope to get the best treatment, outcomes or results from the elected officials they failed to engage with while those candidates were running for their respective seats.

Black people must get engaged and must vote.

However, choosing not to vote at all is a completely different situation altogether. It is detrimental to the growth of the African American community. It does not help, it hurts.

There is a quote that is often referenced when describing someone who is not a part of a major decision that affects them that goes, "If you're not at the table, you're on the menu."

The worst thing African Americans could ever do in the realm of politics is: Nothing.

Have you ever asked yourself why it has been so important to other people to make it difficult for Black people to vote? Why have so many people and groups poured so much money into getting behind select candidates and political parties? Why are people constantly seeking to suppress the vote? Why would people do anything to steal an election through voter suppression and voter intimidation tactics with an emphasis on disenfranchising African American voters?

It is because Black votes matter - and everyone knows it.

African Americans must know it and must show it on November 6. Black people must show that we are actually "at the table" and are no longer just "on the menu" come November 6.

To avoid being "on the menu" as the main course meal on someone else's table, Black people must show up to the polls this election cycle and make their voices heard. Black people must do this, in spite of the continuous neglect and lack of concentration of reaching Black voters through the mediums they are accustomed to by both political parties. Black people must not rely on others to plead their cause or fight their overall battles for them. Black people must vote.

The National Newspaper Publishers Association (NNPA), which represents over 200 Black-owned media companies across the U.S., has been focused on registering 5 million, new Black voters before the midterm elections and is working collaboratively with other national organizations to fight voter suppression and increase Black voter turnout.

"We want the largest, Black voter turnout in American history," said NNPA President and CEO Dr. Benjamin Chavis. "Voter suppression is taking place, because we're voting. But we're going to overcome voter suppression this year, as this is a payback year for African Americans all over the country at the polls."

African Americans should use these midterm elections as a beta test for the 2020 Presidential election and use the results as a tool to make demands and ensure a dedicated seat at the head table prior to 2020. In Texas, straight-ticket ballots will go away, so neither political party will be able to take a lazy approach to proactively educating potential voters on who their candidates are.

More importantly, candidates of either party will no longer be able to simply skate in to office on party affiliation alone and must put in the necessary ground work and investments to make potential voters more aware of their position on the issues that matter to African Americans. The Black vote should no longer be considered a guaranteed vote.

Choosing not to vote leads to dire consequences for African Americans.

There is a big difference between being able to choose what you want versus being told what you will get. No one likes to have things forced upon them. Of course, you could choose to do nothing, which is still your choice and right to do so. But, by choosing not to vote, you are in essence being told who you will get to represent you at every level of government – local, county, state and federal, as well as what you will get when it comes to key public policy issues.

Those who have sought to disenfranchise and discourage African Americans from voting know the importance of voting, as well as the profound impact that voting has on representation, political outcomes and critical decisions that must be made on major issues that impact you.

More importantly, those who seek to disenfranchise African Americans from the voting process know that whoever holds these political positions of power are able to direct necessary and critical resources to select areas. They are also able to ensure that select people are appointed to key boards and select positions that have an impact on you.

Whether you believe your vote matters or not - and it most certainly does - every Black person will have to adhere to any law that is passed and every decision that is made by the elected body of representatives who hold every seat.

There is absolutely no level of complaining or reactionary response that will change that.

There are no acceptable excuses when it comes to voting. Either Black people vote or reap the consequences of not voting. Every Black person should get engaged in politics if they wish to bring about change. So, this is your chance to make a difference. Say it – I Will Vote!

Now go do it! Cast your vote early or be sure to vote on November 6.

Jeffrey Boney is a political analyst for the NNPA Newswire and BlackPressUSA.com and the associate editor for the Houston Forward Times newspaper.