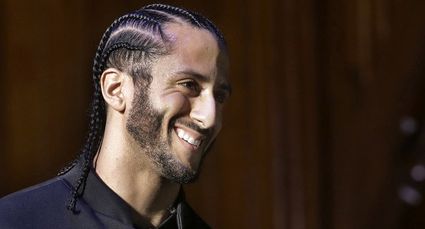 Former football player Colin Kaepernick has continually used his platform as an avenue to bring attention to social injustice. He's been honored by several institutions and organizations for lending his voice and resources to overcome issues faced by the Black community. The latest institution to recognize Kaepernick's efforts is Harvard University. The school awarded him with the W.E.B. Du Bois medal on Thursday, the Huffington Post reported.

The medal is awarded to individuals who are fierce advocates for human rights and who have contributed to shaping Black culture, the news outlet writes. Kaepernick joins a list of legends who have received the award in the past, including the late Muhammad Ali and Maya Angelou. While accepting the award, Kaepernick recounted interacting with a high school football team during his travels around the country.

"One of the young brothers says, 'We don't get to eat at home, so we're going to eat on this field.' That moment has never left me. And I've carried that everywhere I went," he said, according to the news outlet. "I feel like it's not only my responsibility but all our responsibilities as people that are in positions of privilege, in positions of power, to continue to fight for them and uplift them, empower them. Because if we don't, we become complicit in the problem."

Amongst the other individuals who were honored included Bryan Stevenson, Florence Ladd, and Dave Chappelle.

Kaepernick has won several awards for his brave decision to stay dedicated to what he believed in even though it impacted his career. Earlier this year, Amnesty International, a global human rights organization, awarded Kaepernick its 2018 Ambassador of Conscience Award. "This is an award that I share with all of the countless people throughout the world combating the human rights violations of police officers, and their uses of oppressive and excessive force," he said during his acceptance speech.