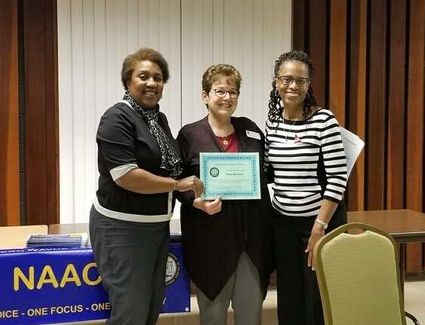 The League of Women Voters of Northwest Wayne County held a voter education forum focusing on three ballot proposals appearing on the November 2018 voter ballot in Michigan. The event was hosted by the Western Wayne County NAACP and the Inkster Alumnae Chapter of Delta Sigma Theta Sorority. The forum was held at Springhill Missionary Baptist Church in Inkster on Tuesday evening, October 23.

Paula Bowman, Vice President of the Western Wayne County branch of the League of Women Voters (LWV), addressed the nearly three dozen voters in attendance. Bowman gave an overview of each proposal, including what the proposals would do, the pros and cons of each, and the three proposals' supporters and opponents.

Those in attendance were eager for more information on the proposals and came prepared with questions. The presentation was informal, and Bowman gladly answered all inquiries, ensuring no one left the forum with unanswered questions or confusion.

Voters attending the forum had the most questions on State Proposal 18-1, which if passed, would become a new law, Bowman explained. The new law would allow persons aged 21 and older to purchase, possess, and use marijuana and marijuana-infused edibles. Cultivation of marijuana plants would be allowed under this law, but individuals would be limited to growing up to 12 plants for personal consumption. Of this proposal, Bowman said, "It's going to legalize recreational use of marijuana." She added that smoking marijuana in public or while driving would be prohibited.

Proposal 18-1 would also permit taxing of commercial marijuana facilities, with the revenue being used for state education, state road funding, and municipality and county

Bowman also discussed Proposals 18-2 and 18-3, both of which, if passed, would become amendments to Michigan's Constitution, rather than new laws. Proposal 18-2 would establish a commission of citizens to be responsible for the redistricting process in Michigan. The proposed constitutional amendment would prohibit politicians, candidates for public office, or lobbyists from serving on the commission. It would also allow for establishing new district criteria to reflect population, diversity and communities of interest.

Proposal 18-3 would amend the state constitution to allow automatic voter registration when applying for or renewing driver's license at Secretary of State branches. The proposal would also allow for voters to receive an absentee voter ballot without providing a reason, allow voter registration right up until and including Election Day, and allow voters the option to vote straight party. The proposal would also ensure military service members and overseas voters would receive their ballots in ample time for the election. Bowman explained that more than 30 states already have these guidelines in place and that Michigan would be among those should the proposal be passed.

The focus of the forum was the state proposals and no candidates for office or their political agendas were discussed. Bowman provided attendees with the LWV's Nonpartisan Voter Guide and other information on registering to vote and finding out more about the issues and candidates on the ballot. "We are strong believers in the idea that voting matters," Bowman said. The League of Women Voters can be reached at http://www.lwvmi.org or at http://www.lwvnorthwestwaye.org. Another resource for voters is http://www.vote411.org