Shut- Up and Dribble documentary comes to Showtime 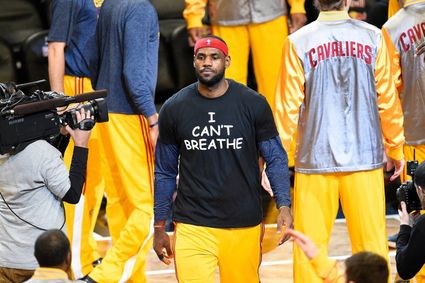 Showtime's much anticipated 3-part documentary series "Shut Up and Dribble" gets its debut Saturday night (Nov. 3).

Directed by Gotham Chopra, "Shut Up and Dribble" looks at the changing role of NBA athletes in our current cultural and political environment - and it was inspired by the widely reported criticism of an interview in which basketball superstar LeBron James discussed his feelings about President Donald Trump.

The criticism started in February, when Fox News talk show host Laura Ingraham hurled insults at James for "talking politics" during an ESPN interview. She called his conversation "barely intelligible" and "ungrammatical" and said she didn't want to hear the political opinions of "someone who gets paid $100 million a year to bounce a ball." During that ESPN interview, in which he also discussed his career and family, James talked about the racial slur that was graffitied on his Los Angeles home in 2017 and touched on politics and Trump.

"Shut up and dribble," Ingraham told James from her "Ingraham Report" show on Fox.

James is one of the series' executive producers, along with business manager Maverick Carter. The documentary is narrated by sports journalist Jemele Hill, who has faced her own criticism for voicing criticisms of Trump while she worked for ESPN. Hill formerly worked for The News & Observer and The Orlando Sentinel. She now writes for The Atlantic.

According to the Showtime site: "The series chronicles the modern history of the league, and how it became an incubator for many of its top athletes to grow their brands beyond the court and become cultural icons. By taking control of their own destinies, basketball players have helped to bring about social change and make their own statements in the current political climate."