ABOLITIONIST, RECRUITER FOR THE FIRST MICHIGAN COLORED INFANTRY, AND ONE OF DETROIT'S MOST PROMINENT BLACK COMMUNITY LEADERS 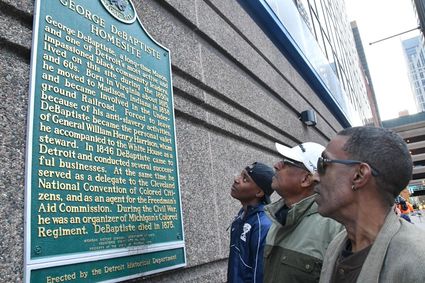 DETROIT - Active member of the Underground Railroad, recruiter of Michigan's Colored Infantry, entrepreneur and one of Detroit's most impassioned and important black leaders, George DeBaptiste will be honored Nov. 12, 2018 at a brief Veterans Day memorial service at his gravesite -- Section C, Lot 24 -- at 12:30 p.m. at historic Elmwood Cemetery.

Under the auspices of the Detroit Association for the Study of African American Life and History (ASALH - Detroit), the service will include a wreath laying along with a presentation by 102nd USCT re-enactors.

Born free in Fredricksburg, Va., in 1815, DeBaptiste learned the barber's trade as a boy, and became a kind of valet to a wealthy southerner, with whom he traveled extensively.

After his move to Madison, Ind., DeBaptiste became acquainted with William Henry Harrison, who would become president of the United States. During Harrison's brief tenure. DeBaptiste, who was fond of Harrison, became a steward of the White House, attending to the president until the president's death.

DeBaptiste and his wife returned to Madison where he opened a barbershop and began his deep involvement with the abolitionist movement. The Ohio River, which Madison overlooks, was a destination for runaway slaves because it was a boundary between free Indiana and slave-holding Kentucky. Responsible for the freedom of hundreds of slaves, DeBaptiste would sometimes walk 20 miles a night, often in pouring rain, to fetch freedom seekers hidden in boats, and set them on a path to Detroit and ultimately, Windsor, Ont. Come morning, he'd be back behind the barber chair, in which would frequently sit slaveholders themselves.

In 1846, following a virulent spate of anti-black violence, DeBaptiste fled Madison for Detroit. The city had an already established black community, including several black-owned businesses. During this time, DeBaptiste was, by turns, a baker, caterer, clothier, restaurateur and real estate holder.

Again, he would make his mark on the abolitionist front. He bought the steamship the T. Whitney, hired a white man to pilot it, and risked his life secretely ferrying freedom seekers to Canada.

During this time, DeBaptiste served as a delegate to the Cleveland National Convention of Colored Citizens, as an agent for the Freedman's Aid Commission, and as a member of the Colored Vigilant Committee of Detroit.

In 1859, he was one of the chosen abolitionists to meet in Detroit with Frederick Douglass and John Brown to hear Brown's plans for armed rebellion at Harper's Ferry, West Virginia.

During the Civil War, DeBaptiste helped to organized the First Michigan Colored Infantry, also known as the 102nd United States Colored Troops. DeBaptiste traveled all over Michigan recruiting. Named a sutler, he followed the regiment to its campaign in South Carolina.

Following the war, DeBaptiste returned to his beloved Detroit. Having sold the steamboat, he dedicated most of his time to politics. On a local level, for example, he sought to put young black students on an equal footing with their white counterparts. On the national front, he worked for the passing of the 15th Amendment -- which prohibits the denial of citizens' right to vote -- and to the 13th Amendment, the abolition of slavery. By the time he died of stomach cancer in 1875, he'd seen both efforts come to fruition. 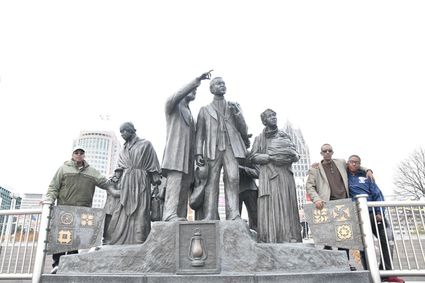 A longtime mason who was twice married and had two surviving children, DeBaptiste is memorialized on a historical plaque on East Larned and Beaubien streets on his homesite.

DeBaptiste was a leader of African-Americans in Detroit.

Elmwood Cemetery is at 1200 Elmwood St. in Detroit, 48207, near Calvary Baptist Church.

The Association for the Study of African American Life and History (ASALH.org) was founded in 1915by Carter G. Woodson, known as the father of black history. The organization is dedicated to the study and appreciation of African-American history.