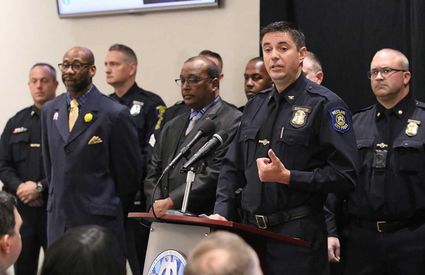 Body cameras used by police officers have gained acceptance around the nation as a practical tool which act as an additional pair of eyes and ears in incidents in which officers must interact with the public. "I think it's the way of the future," Jedrusik says. He adds that a small number of police departments in southeast Michigan use them, the main limiting factor being the cost. "It was a major investment for the city of Westland," says Jedrusik. "I've got to give credit to our mayor and our city council for putting forth the funds for us to be able to get in this program, and the grants we got to help fund some of this." He adds that he believes that at some time in the future, most municipalities will be providing body cameras for their police departments.

While most departments have dashboard cameras, they are limited in their ability to capture all activity taking place wherever a police officer is called to. Only activity which takes place in the front of the patrol vehicle is recorded. Frequently, cell phone video used to supplement the recording of activity does not always capture the entire incident, but rather bits and pieces.

Cameras worn on the police officer's body offer a better perspective of what actually happens when an officer must interact with a resident. Such recordings offer some security to the officer regarding his or her actions and help to ensure the officer is doing the right thing. The video footage is retrieved by the police department and stored as evidence. Additionally, Jedrusik says the department hopes to use such video footage in the creation of training videos for its officers.

Body cameras are not only a practical tool which benefits the police officers. As chief of police, Jedrusik hopes the city's body camera program will aid in promoting the community's confidence and trust in the police department and will also help to maintain the department's commitment to transparency. "The

body camera program is a benefit for the entire community," he adds. "Everyone seems to welcome it." Jedrusik concedes that some bad actions by police officers have hurt the reputation of thousands of dedicated men and women who serve and protect their communities. He says that now Westland residents will know their police officers are wearing cameras and they can have full confidence in the job the department is doing.

Jedrusik and his department are firm believers in community partnership. The Westland Police Department is dedicated to open communication with the community and its members, and believes that the community as a whole will move forward when everyone works together. Transparency and accountability in how the officers do their jobs is certainly a step forward in that goal.