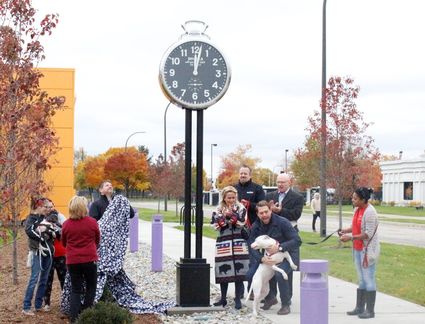 The Friends for Animals of Metro Detroit (FAMD) recently held an open house to celebrate its new adoption facility in Dearborn. The effort took nearly 15 years and the education and adoption center is now a reality. To help extend the celebration, Shinola, the luxury goods company based in Detroit, gifted a double-sided street clock to the facility.

The gift was celebrated on Friday, November 2, the last Friday before the end of Daylight Savings Time. The event was called Fall Back for FAMD. The clock, which stands roughly 14 feet tall, was unveiled right at 12:00 p.m. On hand for the unveiling were FAMD Executive Director Elaine Greene, FAMD Board Member Al Kammerer, Shinola's VP of Marketing, Al Drinker, and Congresswoman Debbie Dingell. FAMD Staff and volunteers joined in, along with a small sampling of adoptable dogs from the shelter. The celebration included a pizza party.

Kammerer says the decision to hold the clock's dedication on the last Friday of Daylight Savings Time was to create a connection between time in general, and Daylight Savings Time. Kammerer worked with FAMD Board Chair Mary Ann Wright to make the new facility possible through tireless fundraising. He says the new adoption center is a nice way to bring people into the city of Dearborn and adds that it appears that the center is already seeing more traffic and visitors than it had at its previous location on Greenfield. The new shelter sits along Reckinger Road, behind the 19th District Court and the Dearborn Police Department.

FAMD's Executive Director Elaine Greene says the work is not finished yet. "We're on our way to building a second phase so we can move all of our operations under one roof, that's our goal," she says. 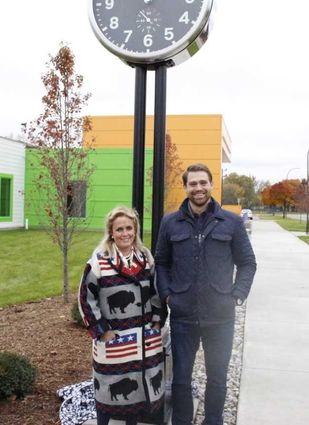 The Shinola Clock Company has also gifted four clocks to the city of Detroit, each located at bustling areas of high traffic. The clock faces are enclosed in stainless steel and are more than three feet in diameter. The double-sided clocks are lit up by LED lights at night to allow those passing by to see the time at night as well. FAMD is grateful for the gift, which also helps shine a light on Dearborn as well. "We think it's a nice attraction for the shelter here," Kammerer says, "to have people drive by and look at it, and then that brings more people in."

Greene adds that the new building's colorful look is attractive to those just driving by and will hopefully draw in people who are just curious about the new adoption facility. "It's such a great, cheerful experience for people who come here," she says.