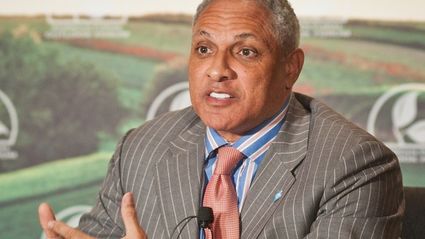 It's a campaign that flew quietly under the radar – though the outcome could not only make history but change the dynamics in the United States Senate.

Down in the Delta – where the public lynching of African Americans was the rule and not the exception and the Ku Klux Klan was usually law enforcement, judge, jury and executioner – Mike Espy, a black man, has forced a runoff against Republican Sen. Cindy Hyde-Smith.

As stunning as Espy's rise in one of the classic "Good Ole Boys" states, Hyde-Smith, perhaps in a fit of desperation or a time lapse, helped to shine the spotlight on the race that had taken a back seat to the historic runs for governor in two other southern states, Florida and Georgia.

"If he invited me to a public hanging, I'd be on the front row," Hyde-Smith said as she was surrounded by cattle rancher Colin Hutchinson and other supporters at a gathering in Tupelo.

Hyde-Smith later tried to walk back the inflammatory comment, saying "In a comment on Nov. 2, I referred to accepting an invitation to a speaking engagement. In referencing the one who invited me, I used an exaggerated expression of regard, and any attempt to turn this into a negative connotation is ridiculous."

If the comment was an exaggerated expression of regard, many in the one-time civil rights hotbed - and many more from across the nation - didn't see it that way. It not only ignited interest in the under-the-radar Senate race, it galvanized Espy's supporters.

"Senator Cindy Hyde-Smith's shameful remarks prove once again how [President Donald] Trump has created a social and political climate that normalizes hateful and racist rhetoric. We've seen this in Florida from Ron DeSantis and others during this election season and denounce it," NAACP President and CEO Derrick Johnson said in a statement.

Trump has endorsed the incumbent senator.

"Hyde-Smith's decision to joke about 'hanging,' in a state known for its violent and terroristic history toward African Americans is sick. To envision this brutal and degenerate type of frame during a time when Black people, Jewish People and immigrants are still being targeted for violence by White nationalists and racists is hateful and hurtful," Johnson said.

According to the NAACP, Mississippi had 581 lynchings between 1882 and 1968, more than any other state. The state's population has the highest percentage of African-Americans of any state, 37 percent according to the last census.

"Any politician seeking to serve as the national voice of the people of Mississippi should know better. Her choice of words serves as an indictment of not only her lack of judgement, but her lack of empathy, and most of all lack of character," Johnson said.

Senator Hyde-Smith's remark that she would "be on the front row" of a "public hanging" is repulsive and her flippant disregard for our state's deep history of inhumanity tied to lynching is incensing," said Jackson Mayor Chokwe Antar Lumumba.

"What is worse is her tone-deaf justification for the comment," said Lumumba, who's African-American.

Activist Shaun King expressed his disbelief in the comment.

"A sitting United States Senator. In Mississippi just said, 'If he invited me to a public hanging, I'd be on the front row.' Really? She just said this in the heart of lynching country. She's running against a black man. Unthinkable," King said.

The ACLU of Mississippi released a statement calling Hyde-Smith's comments "Despicable and abhorrent."

"We expect and demand that Mississippi leaders represent and remain committed to inclusion and diversity. Sitting senators should not be referencing public hangings unless they are condemning them," The ACLU's statement said.

Espy himself weighed in.

"Cindy Hyde-Smith's comments are reprehensible. They have no place in our political discourse, in Mississippi, or our country," Espy said. "We need leaders, not dividers, and her words show that she lacks the understanding and judgment to represent the people of our state."

The race for the Senate out of Mississippi has grown in its importance since election day. With the Democrats taking control of the House, the party has continued to narrow the majority in the Senate.

After a stunning victory in Arizona by Democrat Kyrsten Sinema, Republicans hold a narrow majority of 51 to 47, with two other Senate races still unresolved – in Florida between GOP Gov. Rick Scott and Democratic Sen. Bill Nelson and the Mississippi contest.

Espy once served as agriculture secretary under Democratic President Bill Clinton and, in 1986, he became the first African-American from Mississippi elected to Congress since Reconstruction.

Born in Yazoo City, Mississippi, Espy received a B.A. from Howard University in 1975 and then attended law school at the University of Santa Clara where he received his J.D. degree in 1978. Espy returned to Mississippi after law school and worked as an attorney for Central Mississippi Legal Services from 1978 to 1980, according to blackpast.org.

Between 1980 and 1984 Espy served as assistant secretary of the Public Lands Division for the State of Mississippi and then took the post of assistant State Attorney General for Consumer Protection, a position he held until 1985.

The following year Mike Espy won the 2nd Congressional District seat which included much of the Mississippi Delta, becoming the only black Congressman to represent a predominately rural district.

Now, Espy is trying to unseat Hyde-Smith, whose comments have those outside of Mississippi rallying for him as the runoff approaches on Nov. 27.

"North Mississippi and Memphis are connected at the hip," said Corey Strong, the Shelby County Democratic Party Chair in Memphis.

"We are looking at potentially having a day of action for members of Shelby County and a concerted effort to go down and support Mike Espy in that race," Strong said.