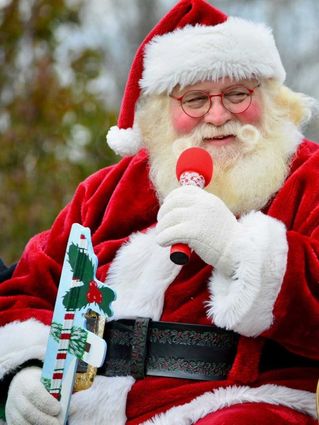 The 58th Annual Garden City Santaland Parade will be held on Saturday, November 24 at 10 a.m. The parade has been a tradition in Garden City since 1961. Parade spokesperson Dan York has been with the parade committee for 15 years and says that apart from the Detroit Thanksgiving Day Parade, the Santaland Parade is the oldest in the region. He adds the parade is very well-run. "It's a very professional-losing parade without losing the hometown feel," he says.

York adds that the parade committee had added a second performance area last year for spectators to enjoy the parade entrants. The hour long parade will feature floats, marching bands, unicycles, and drill teams, among others. Select parade entrants such as marching bands and dancers will perform near city hall where the parade telecast and video recording will take place. A second performance area will be at the end of the parade route, on Ford Road. Winners of the float contest will be announced here. The entire parade route is about a mile, down Middlebelt Road from Garden City High School, to Ford Road and east toward Central Street.

Three hometown favorites will serve as Grand Marshals for the annual event. Miss Michigan USA 2019 Alyse Madej will add her charm and grace to the day's festivities. Madej is a 2011 graduate of Garden City High School and currently works as a marketing coordinator for major automotive companies. Model, actor and Garden City High graduate Michael Pack will join Madej as Grand Marshal. Pack also played football for Wayne State University and his current project is the film 22, a sports biography. Rounding out the trio of Grand Marshals is Garden City teacher Carla Young. Young emphasizes patriotism and community service in her classroom. She recently received one of five Teacher of the Year awards from the American Legion at its annual conference in Kalamazoo.

The highlight, of course, will be the arrival of Santa Clause. The jolly elf will make an appearance at the parade and will make his way to the Garden City Café, located at 5662 Middlebelt, to meet with children and update his gift list. The event is family-friendly and hot chocolate will be available. Those who miss Santa at this event have another opportunity to get their holiday wish to him on Monday, November 26, at the city's Holiday Christmas Tree Lighting in the Commons Corner.

The Annual Santaland Parade is no small task to organize. A parade committee of seven begins putting ideas together early each year. Kevin Kramis, head of parade staging says the big challenge each year is

getting volunteers organized and finding people willing to help. This year, roughly 100 volunteers will help make things go smoothly. Both Kramis and York concede that each year, amazingly, things always seem to work out. "They love it," Kramis says of the local community's response. "It's probably the community's biggest event of the year." For more information on the Santaland Parade, visit http://www.santalandparade.org.