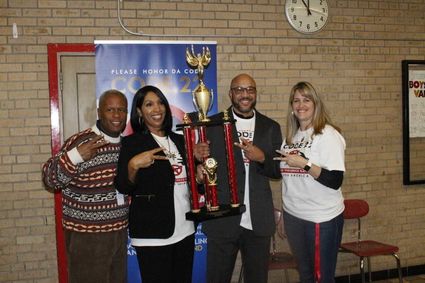 Crime statistics for the city of Detroit are grim. According to the FBI's database, the number of violent crimes which occurred in the city for the year 2016 was 13, 705, up 15.7 percent from 2015. The city's own website list statistics for the same year and indicates homicides were up 2.3 percent, rapes were up 4.8 percent and auto thefts were up 5.8 percent.

In a city of more than 670,000 people, crime and violence have become an acceptable part of life for some. But violence is not only on the streets. It finds a home on our television screens, our computer screens, in our video games, in songs and in films. Young people are becoming numb to the violence they see and hear about around them. The Rev. Ovella Davis wants to change all that.

Davis is President of the United Communities of America (UCOA), an organization she founded to address violence and negativity, and to promote peace and positive change in the community. One of the organization's points of focus this year will be on the region's youth and the impact violence and bullying has on them.

A native Detroiter, Davis understands the urban mindset some youth embrace which glorifies harsh actions, bullying and physical violence. To those who grow up with domestic abuse, the violence appears normal and will ultimately repeat itself. To counter that, Davis developed Code 22, which calls for a citywide day of peace on the 22nd day of each month. Ten cities in southeast Michigan have joined the plan and the respective mayors have signed proclamations declaring the 22nd day to be a day free of violence and negativity throughout their cities.

UCOA has initiated a program involving high school students in which two schools with equal size student bodies will compete to determine which school can be most proactive in promoting peace and unity. The two schools involved this school year are Ecorse High School and Robichaud High School in Dearborn Heights.

The competition opened with both schools vying to get students to join the program and make the daily conscious decision to choose peace and positive behaviors instead of quarreling and fights. Many students were interested but Davis says some students were hesitant because they believed choosing to walk away from confrontation would make them appear weak. Principal Melanie Learst says the goal of the program is to promote peace in the school and reduce violence and fights. "This program has really brought attention to decreasing fights at our school," she said. Davis has developed a point system which will help keep students at both schools on track. They gain points for peaceful choices and lose points for promoting fights or negative behaviors. She hopes participation in the program will encourage students to devalue violence and negative behaviors and attitudes.

Ecorse Principal, Kenneth McPhaul says, the youth are really taking to her message and they feel her passion. Over the three months that the program was at Ecorse High, there was about a 30% reduction in altercations.

Robichaud High won the initial phase of the competition, earning the most points for the month. A celebration was held at Robichaud on Tuesday, November 27, which included presentation of a trophy, a pizza party and goody bags with a Target gift card, food coupons and T-Shirts for everyone. Attending the celebration was Westwood School Superintendent Dr. Stiles Simmons. "We came out on top," he said. "We're really proud of our students for their efforts to promote peace and assure that the school culture and climate remain safe and peaceful."

Also attending the celebration was Dearborn Heights Mayor Daniel Paletko. He believes the Students for Peace Program will help to change the way young people think and feel about negativity and violence. "I was very impressed how the Robichaud student body has embraced all concepts of the program, and because of this, it is going to be a big success," the mayor said.

The competition will continue throughout the school year, with the 22nd day of each month through May being devoted to promoting peace. "The students want to experience peace, they just don't know how," Davis explains. Other tools the students will be using include school assemblies which focus on positive choices, posters in prominent places on each campus and group conversations in the schools emphasizing the benefits of not engaging in a potentially negative or violent situations.

The event was successful due to support from local partners and the UAW.

Davis possesses a passion for peace and her hope is to ultimately take the program nationwide. She explains that besides benefitting the students, peace benefits the school faculty and the community as a whole. "In our organization, it's our way of saying, 'even though violence is familiar, it's not normal.'" Davis invites the entire community to observe a day of peace on the 22nd of each month. For more information see the organization's website at http://www.ucoa.org.