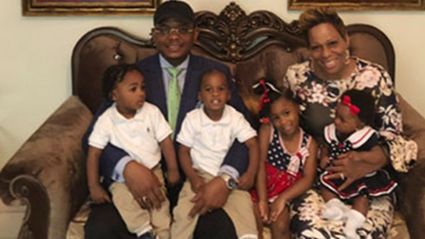 The holiday season is upon us, and On the Scene is totally in the spirit. Like so many across the nation, in between family time, feasting, and shopping, I am reflective and considering all that we must be thankful for. In speaking with Pastor Derrick J. Hughes, I was overjoyed with emotion hearing how he is showing gratitude this holiday season.

Hughes is the Senior Pastor of First Baptist Piney Grove, a prominent Fort Lauderdale church. In an intimate conversation with Pastor Hughes, I was able to understand how he and his wife, Deborah Hughes, are actively showing gratitude by sharing their home with four young children. What started out as a short-term plan for foster care developed into a long-term plan of adoption when the couple adopted four babies: two boys and two girls – Ta'Najah Deborah (3), Immanuel Derrick (2), Elijah Yeshuah (1), and Nylah Tehillah (10 months). Having been married for more than 23 years, with six adult children and an empty nest, this couple's decision to adopt would be described by many as shocking, rewarding, humbling and gratifying.

Pastor Hughes explains: "It started out as a foster care arrangement for just one child, but we learned that there were 2 more siblings and we were asked if we could take them as well, and we agreed." They found out later that the children's biological mother was expecting a 4th baby, and the Hughes embraced that child as well, with no hesitation. And while their minds were still set on a temporary foster care situation, once they saw the children, the moment could only be described as a divine connection, and Pastor Hughes and his wife knew that these children would be theirs forever. "It is my privilege to take responsibility for these children," Pastor Hughes goes on to explain. "And while they just genuinely want to be loved, my wife and I know that we are the greatest benefactors in this situation. The love they have given us can't be explained."

In an online article regarding foster care statistics, pro-miselovefoundation.org, reports "in the U.S., 400,540 children are living without permanent families in the foster care system. 115,000 of these children are eligible for adoption, but nearly 40% of these children will wait over three years in foster care before being adopted. Additionally, each year, over 27,000 youth "age out" of foster care without the emotional and financial support necessary to succeed." Pastor's voice was filled with emotion and sincerity when I asked how the community can help. "These children just need homes, and many of them are in African American communities. We need people who will not do it for the money but who will do it for help these kids. We gotta help these children." Statistics further show orphaned minority children who age-out of foster care typically end up homeless or in jail.' Using James 1:27 as a reference, Hughes says the bible instructs us to look after orphans and widows in their distress. For Pastor Hughes, it is his personal ministry to do something for the community that requires an ongoing commitment, not just an occasional work.

Though there are a few more legal formalities, this year was the Hughes Family's first Thanksgiving with all four children together, and the Hughes are filled with more love and gratitude than they can contain. In interviewing Pastor Hughes, I learned that serving the Lord is not about resources. It's about using what you've been given, in and out of season, to be a blessing. Let's all take a take a cue from Pastor Hughes in this season, adopting opportunities to not just say we are blessed but to be a blessing.

This article originally appeared in The Westside Gazette.