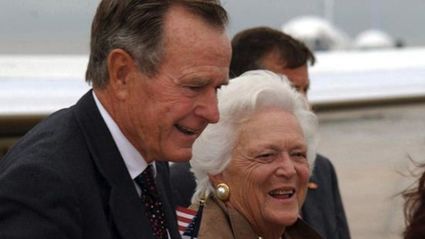 The death of former President George H.W. Bush on November 30 was the impetus of much comment and debate on his legacy.

Many kept their tributes to a focus on his incredible military service in World War II. Others focused on the simple fact that, compared to the unprecedented behavior of the current occupant of the White House, Bush represented a more respectful political time.

Several Black journalists who worked around him and had a close up view of the man as an individual, shared memories on social media.

"I am posting some of my images of President George H. W. Bush. I enjoyed a great relationship with both Presidents Bush, who allowed me great access to both the Oval Office and Air Force One. Rest In Peace. You will be missed," wrote Fred Watkins, a veteran African American still photographer who has covered the White House for four decades.

Another African American still photojournalist, Ron Thomas, posted two photos of himself and George H.W. Bush on his Instagram account. One included the former President greeting Thomas with a handshake after an event.

"It's important to me to join the Bush family in celebrating President George H.W. Bush's exemplary life. This will unfortunately preclude my visits to Paris and Berlin. I've been deeply touched by the enthusiasm for my memoir, and I'm working to reschedule my trip for next year," wrote former First Lady Michelle Obama on twitter on December 2.

Michelle Obama's book "Becoming" sold over two million copies in fifteen weeks. She is now taking time away from her book tour to attend the former President's funeral on December 5.

But many others wanted to discuss the other side of the legacy of the 41st President. That side included an extension on the war on drugs.

"President George Bush wanted to show America what crack cocaine looked like at his first Oval Office address on Sept 5, 1989. He wanted to show you could even buy crack in front of the White House. That's how bad the crisis had gotten. That's how Bush announced his War on Drugs," tweeted Joshua Davis, an Assistant Professor at the University of Baltimore.

"George Bush using the legendarily racist Willie Horton ad, was an example on how white supremacists use one Black person as a proxy to represent ALL Black people," wrote Tariq Nasheed, an anti-racism strategist based in California, on Twitter.

But still others mentioned, "a thousand points of light" and a kindler gentler Republican that is now viewed in stark contrast to what has been witnessed during the Trump's time in office. Trump's two years has featured xenophobia, a specific racist attack on what Trump defined as "s***hole countries, and two close former advisors, Michael Cohen and Omarosa Manigault, telling reporters that President Trump has made openly racist statements.

In contrast, Raynard Jackson, a Black Republican, wrote of a positive relationship with Bush and his advisors. Jackson also added, "Because of the Bush family, I am slowly backing away from a lot of political activities simply because relationships seem to mean nothing in today's political climate. Everything seems to have denigrated into nothing more than transactional relationships; not relationships of substance. This devaluing of relationships is what's going to be severely missed by the death of 41 and others in his generation."

Part of what makes the current analysis of the George H.W. Bush's legacy complicated is that the bar has been lowered by Donald Trump. Against that backdrop, there's not much about the legacy of the 41st President that is now seen as being all that bad.

A state funeral for the 41st President took place in Washington, D.C, on December 5.