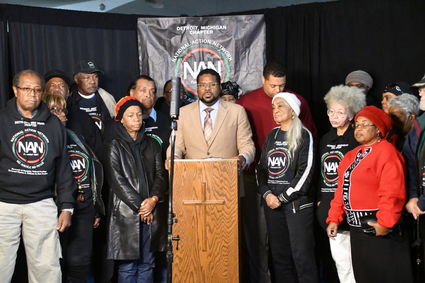 The president of the Michigan Chapter of the National Action Network (NAN), the Rev. Charles Williams II, held a press conference on Monday, December 3, to address concerns about the practice of granting tax abatements to corporations and developers within the city of Detroit. Such incentives are awarded in the hopes that businesses will provide steady employment for the local community. Williams, flanked by NAN members and supporters and local retirees, called for a moratorium on tax abatements for corporations and developers in the city of Detroit

The impetus for Williams' argument is the news which broke last week that General Motors had made plans to close the Detroit-Hamtramck Assembly Plant, along with two other plants in Ohio and Ontario. The move will eliminate roughly 6, 200 jobs by the end of 2019. GM has said the move was purely a business decision.

Williams reminded those in attendance of the storm of controversy which arose when GM first proposed building the Detroit facility in 1985. Residential homes and churches sat on the land which GM wanted in order to build the assembly plant. Protests and court battles ensued, but eventually the land was acquired by GM via eminent domain, citing economic development as a benefit for the community. Williams claimed the latest move by GM is personal because residents of Detroit sacrificed their homes and churches in order for the plant to be erected. Williams added that workers filled the plant, keeping the assembly line humming and paid their fair share of taxes to the city and state, while GM enjoyed the benefit of suspension of tax remittance through abatement.

Williams added that manufacturing has been the way of life in the Midwest for generations. But now, he says, the automaker plans to put roughly 1,500 workers out of a job in a city which sacrificed part of its neighborhood in order for that same plant to be built. Williams argues that with the planned closure, the city has essentially received nothing from GM in exchange for its tax exempt status. He suggests that tax abatements provide no benefit to civic operations because the corporate tax dollars are absent, meaning funding for schools, police and fire departments, transportation and other public services suffer. "Every time we give away tax dollars in this city, we tighten the noose around the neck of public servants," Williams said. 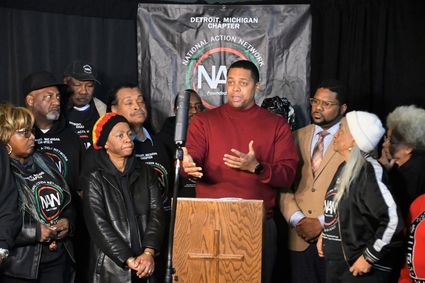 also. He concurred with Williams' assertion that the practice of granting tax abatement does not make financial sense. "We have to start understanding that the trickle-down effect doesn't work nationally, nor does it work locally either," he said. "It's called quid pro quo," he added, "it says, 'okay GM, you want to come here, you want to help create jobs for our city, we're going to do this tax abatement because we want jobs, and now you're saying you're going to eliminate those jobs.'" Either way, Mack contends, residents are stuck with the tax bill.

The National Action Network plans to work with the Detroit Mayor Mike Duggan, along with the Detroit City Council and the City Charter Commission to bring about a suspension of the practice of granting tax abatements within the city as a regular practice.

The press conference was held at the Historic King Solomon Church 1600 14th St in Detroit.

For more information on the campaign set forth by NAN, see the organization's website at http://www.nationalactionnetwork.net.