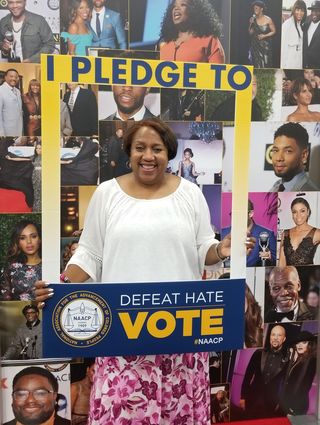 The Western Wayne County NAACP was named the 2018 Branch of the Year at the Michigan State Conference State meeting last month.

Steward, who accepted the award on behalf of the branch said that they have focused their efforts on getting people involved in the political process, building partnerships with local organizations, exposing young people to elected officials and staying relevant in the community. Some of the things they accomplished during 2018 includes hosting a Community Health Fair in Wayne, discussing civil rights with students in Dearborn Heights, Melvindale and River Rouge, hosting a Candidate Forum in Inkster for the 13th District seat to replace Congressman John Conyers, and partnering with the League of Woman Voters and the Inkster Delta Alumnae Chapter to host a Proposal Education Session. The Criminal Justice Committee partnered with the Inkster Chapter of National Action Network (NAN) to work with the Westland Police Departments and other departments in the region to develop plans to improve police and community relations.

Their focus in 2018 was on increasing the number of people that voted in the Primary and General Elections. Steward added, "Our Political Engagement Chairperson, Judy Neal, worked us hard as we had numerous strategy meetings, door knocking and phone banking sessions that resulted in a 100% increase in voter turnout in areas that we concentrated on."

"Our branch's efforts to get more young people involved has resulted in us implementing our Young Adult Committee. The young people that participated with our door knocking and phone banking campaigns now understand the importance of voting. They are fired up and ready to get involved." 1st Vice President Pastor Velma Jean Overman said.

Michigan State Conference President, Yvonne White, said "The Western Wayne County Branch under the leadership of President Steward has been working to continue to improve the branch and reach out to all of the cities in their region. Their participation in state meetings, workshops, national phone calls, trainings and attendance at convention sessions has been noticed throughout the state." The elected officers who will continue with this positive energy for 2019-2020 are; President – Gina Wilson Steward, 1st Vice President – Pastor Velma Jean Overman, Secretary – Vicki Dobbins, Asst. Secretary – Judy Neal, Treasurer – Evelyn Clark and Assistant Treasurer – Shirley Hankerson.

The Western Wayne County NAACP branch is in the midst of it's membership drive and they are looking for people of all ages to become members. Steward said, "We are asking that former members renew their membership and anyone that is interested in helping us to fight to ensure we have a society in which all individuals have equal rights without discrimination based on race to get a membership. 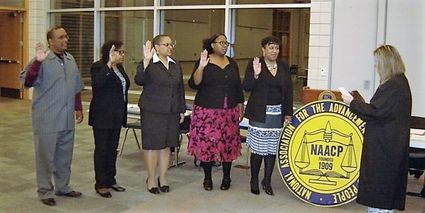 Join them as they celebrate being Branch of the Year at their January General Membership meeting on Monday, January 14, 2019 at Christian Faith Ministries 27500 Marquette in Garden City. The meeting begins at 7:00pm. No matter what your passion is, there is a committee for you to get involved with. Stop by to meet the chairpersons of the standing committees.

One of Steward's favorite quotes is, "If you can't fly then run, if you can't run then walk, if you can't walk then crawl, but whatever you do you have to keep moving forward." ― Martin Luther King Jr.

If you have any questions please call 313-949-3133, email [email protected] or reach out to them on Facebook at Western Wayne County Branch NAACP