The Tale of the Sly Rooster and the Foolish Fox 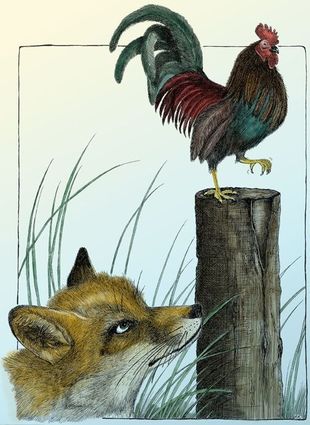 In the pen of a large poultry farm was a sly rooster. He played tricks on the other birds on the farm, and was not very well liked. Late one afternoon, a fox slipped into the pen under the fence and grabbed the rooster in his mouth and made his escape under the fence.

The barnyard dog began barking and the farmer ran after the fox, intending to rescue his rooster. "Come back, you wicked fox!" yelled the farmer as he ran. The rooster had been struggling to get away but he was held firmly in the fox's mouth. Suddenly, he had a sly idea.

The fox was delighted to hear this and was only too glad to relay the rooster's words to the farmer, who was hot on his heels. "He wants you to go away..." began the fox, but when he opened his mouth to speak, the rooster escaped and flew up to a branch in a nearby tree and was safe from the fox.

The fox had no dinner that night and had learned this lesson: even if someone is urging you to speak, sometimes it is best to just keep your mouth closed.