Rexy Rolle Changing the Game in the Airline Industry 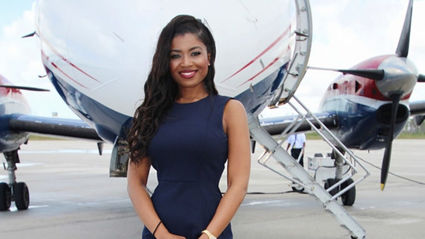 Although she acknowledges setting "big goals," Sherrexcia "Rexy" Rolle said the magic really happens in the small steps it takes to reach those ambitions.

"That's where the victories are won, in your daily to do list," said Rolle, whose boardroom and classroom accomplishments likely turn as many heads as her modelesque looks.

At 30, Rolle serves as vice president of operations and general counsel of Western Air Limited, her family's company and the largest privately-owned airline in the Bahamas.

She's climbed the corporate ladder, but nothing was handed to her – Rolle clearly has earned her wings. "My family instilled a very strong work ethic in me as a child. We strongly believe in the principle of big faith and hard work," Rolle said.

In business since 2000, Western Air was founded by Rolle's parents, Rex and Shandrice. The airline conducts an average of 42 flights per day, 365 days a year and has a team of 165 employees.

"My dad was a private pilot at the time and my mom was an international business major, just graduating college," Rolle said.

"My Mom and I went to Andros for my great grandmother's funeral and on our return, we were stuck at the airport for almost the entire day. I remember her and I saying, that there must be a better way to travel from one island to the next," she said.

"It wasn't difficult to convince my Dad who is an aviation enthusiast. We sought financing for one aircraft and the aircraft financier believed so much in the idea and offered to finance three aircrafts, zero down as a package," Rolle continued.

Rolle's family wasn't rich, as her dad was one of 13 children who came from very humble means. "My parents' journeys, the good and the bad, inspire me and are what makes me believe that I can do anything with God, hard work and dedication," she said.

Rolle, who is originally from Mastic Point, Andros in the Bahamas, grew up in Fort Lauderdale, Fla. After attending eighth and ninth grade in Andros, she attended Montverde Academy, an international boarding school.

Rolle completed her undergraduate studies at the University of Ottawa in Canada where she excelled in a joint honors program in Political Science and Communications. Later, Rolle earned a Masters in Mass Media and Communications at Lynn University in Boca Raton, Fla. After graduating from Thomas Jefferson Law School in San Diego, Rolle was admitted to the State Bar of California.