LANSING - Over the weekend, an envoy of officials from Senegal were hosted by state Rep. Isaac Robinson (D-Detroit) to tour the city of Detroit and meet with local officials including Mayor Mike Duggan and Wayne County Commissioner Jewel Ware. They also met with Chancellor Curtis L. Ivory's team from Wayne County Community College District to discuss student exchange and study aboard programs. The envoy then joined Rep. Robinson at the Capitol today.

"I was honored to have Vice President Aly Lo of the Senegal Legislature, Mayor Daouda Niang of Rufisque, Mr. Sidy Mbaye, Secretary-General of the city of Rufisque and Mr. Abdoulaye Mbengue as my guests on the House floor," said Rep. Robinson. "Senegal and Detroit have a long-standing history, and I hope we will all continue to enjoy this mutually beneficial relationship."

Mayor Daouda Niang of Ruflsque presented his project to Mayor Duggan and also to the community at a reception at Plymouth United Church on Sunday and at a barber shop meeting that Robinson hosted with the Woodward Village Neighborhood Association. "The RUFISQUE GATE OF RETURN Project is an initiative 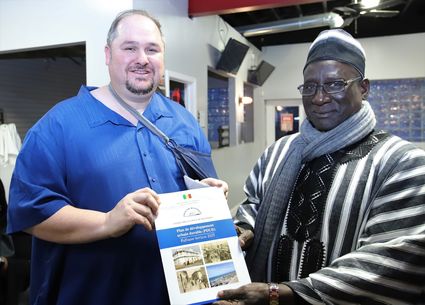 of the City of Rufisque as part of the repositioning and modernization Policy of the city of Kumb Lamb. This is an infrastructure dedicated to African Americans or more specifically to a house of Americans in Africa. Its main mission is to serve as a bridge between America and Africa by identifying, valuing and exploiting in a

win-win partnership all the existing potentialities on both sides of the Atlantic Ocean."

Additional members of the delegation, who were unable to travel to Lansing, include Ms. Adiaratou Aissatou Sabara, vice president of the Decentralization Cooperation Commission; Mr. Amadou Sene Niang, municipal counselor and special counselor to the mayor and Mr. Alhousseynou Ba, CEO of One Africa Social Media. Representatives of the delegation were also presented with a commemorative tribute.