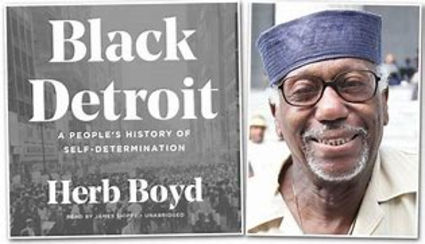 Boyd will present Leadership and Self-Determination in Early Twentieth-Century Black Detroit and sign copies of his latest book, Black Detroit: A People's History of Self-Determination. The presentation begins at 7 p.m. in Madame Cadillac Hall. This event is free and open to the public. Books will be available for purchase.

"We are pleased that Professor Boyd has accepted our invitation to speak at Marygrove," says IDS co-founder Frank Rashid. "Black Detroit derives from decades of rich personal experience and thorough research into the lives of black Detroiters."

Previous Defining Detroit speaker and Pulitzer-Prize winning historian Heather Ann Thompson observes that readers of Black Detroit "not only experience the very epicenter of this nation's most important freedom struggles, but they come to know a city that has always, always, been anchored by a most powerful and determined black community."

Herb Boyd is a journalist, activist, teacher, and author or editor of twenty-three books. His articles have been published in the Black Scholar, Final Call, the Amsterdam News, Cineaste, Downbeat, the Network Journal, and the Daily Beast. A scholar for more than forty years, he teaches African American history and culture at the City College of New York in Harlem, where he lives.

Defining Detroit is a series of Detroit-focused lectures, readings, exhibits, and performances established in 2000 by the Marygrove College Institute for Detroit Studies.