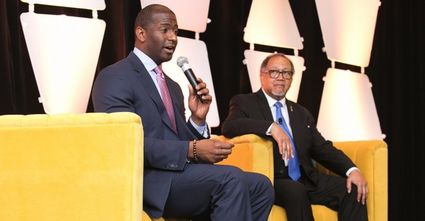 Gillum also took time to thank Chavis, NNPA Chair and Crusader Newspapers Publisher Dorothy R. Leavell, and other members of the Black Press for fair and accurate reporting during his campaign.

Former Tallahassee Mayor and Florida Gubernatorial Candidate, Andrew Gillum, didn't break the kind of news that many publishers, editors and journalists may have wanted at the National Newspaper Publishers Association's (NNPA) annual Midwinter Training Conference in Orlando, but the HBCU graduate did provide the Black Press of America some newsworthy tidbits about what he's doing now and what the future might hold.

"Beginning in about two weeks I will be teaching a fellowship at Harvard University," Gillum said in an exclusive tidbit from a fireside chat conducted by NNPA President and CEO Dr. Benjamin F. Chavis, Jr. during a luncheon at the Hilton Orlando Hotel on Thursday, Jan. 24.

The luncheon was sponsored by General Motors and Wells Fargo and representatives of both companies were on hand to talk about their commitment to the Black Press.

Gillum, who lost a tight and controversial race to Republican Ron De Santis by just 30,000 votes, said he has also been spending time with his family.

However, even with a wife, three children and a new teaching job, Gillum also hasn't lost his focus on politics or the 2020 presidential election. "My grandmother says 'know better, do better,'" Gillum said.

"I learned something about the gap that exists in my state and that there are road barriers for the Democrats. The young voters turned out at the highest rate in the history of the state of Florida," he said, noting that his goal is to help register 1 million voters by the 2020 election.

For those seeking to win in 2020, Gillum said it's paramount that they engage the Black Press.

Gillum made note of the partnership between the Black Press and corporations like Wells Fargo and General Motors.

He called relationships like that a win-win where there's major benefits for each party, but he still commended those companies for "putting their money where their mouths are." It's something that presidential and other political hopefuls should follow, Gillum said.

Chavis told the Democrat that the Black Press couldn't be more proud of his efforts." All of us, and Mayor Gillum, let me tell you that we represent over 215 African American newspapers and media companies across the country and, conservatively, we reach about 25 million in print, digital and social media," Chavis said.

"There's about 47 million African Americans in the country and we reach the majority. On behalf of the Black Press of America, we couldn't be prouder than to witness your campaign," Chavis said, in a comment echoed by Houston Forward Times Associate Editor and Columnist Jeffrey Boney.

"Thank you for running an outstanding race that was full of class and showing us what class and intelligence looks like as opposed to foolishness and racism," Boney told Gillum.

As he's toured the country, Gillum said he's surprised about how many have zeroed in on the particulars of his race against De Santis. "I have to tell you this race was the highlight of my life to this point," he said. "We put a lot into it and it took a lot out of me."

Since the election, he said he's been invited to speak at many events but has remained selective. However, he said the Black Press remains important, which is why he accepted an invite to attend the Midwinter Training Conference.

He said he's picked up a few lessons from his campaign, including how important a role Florida played in past elections and how critical a role it'll play in future campaigns. "In terms of electoral politics and where we are going as a nation, the conversation is on full display here," Gillum said.

"Here in the state of Florida, we deal in real-time voter suppression and voter disenfranchisement and we undermine the democratic process," he said, noting that he lost by 30,000 votes in a race where 8.2 million ballots were cast.

"You had about 20,000 votes rejected off of signature and these are voters who had ballots sent to them, fixed their signature and added their own postage because in my state, every county pays for postage," Gillum said.

A recent study noted that of the rejected signatures, 7 out of 10 were individuals of color. 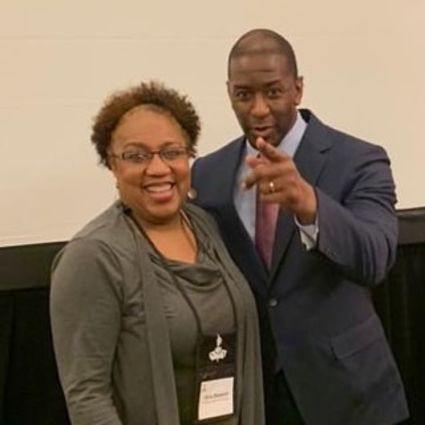 It's another reason why the role of the Black Press, it's publishers and journalists are so important, Gillum said. "You couldn't be more important in today's politics and culture than you are right now. As we stare down the barrel of the 2020 presidential election where we have the most diverse candidates, if you're not at the table they say you're on the menu."

Gillum referenced the recent CBS News release which touted the network's 2020 election coverage team. It didn't include an African American and has since drawn the ire of those in the Black community. "It's a problem," Gillum said of the CBS release.

"Anybody who looked at that and thought it was celebratory is clearly missing out on some important lenses in the context of this conversation," he said.