The Polar Plunge Returns to Belleville This Weekend 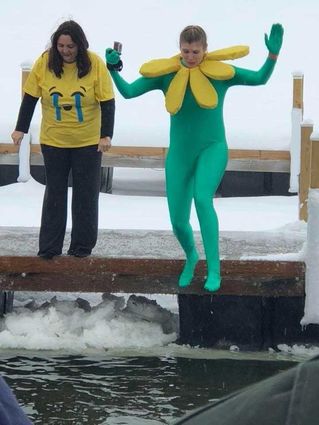 Plunger teams dress in costumes to add to the festivity

Winter has arrived and that means that it's time to raise some money for a good cause. Special Olympics Michigan has been cheering on athletes since the late 1960s. The organization, Law Enforcement Torch Run (LETR), a grassroots fundraising campaign made up of law enforcement professionals, is once again presenting the Polar Plunge, a wild, and some say, crazy, way of raising funds for Special Olympics Michigan.

This year, 30 Polar Plunges are scheduled to be held throughout the state, the first five of those being held this past January 26 in locations like Berrien, Livingston and Macomb Counties. On Saturday, February 9, the Wayne County Polar Plunge will be held at the Belleville Yacht Club. David Katz is a member of LETR and employed with the Michigan Department of Corrections (MDOC). Katz is organizing the event and has been involved with Special Olympics Michigan for over 20 years. He explains that the Polar Plunge event came to Michigan around 1999. The event did not catch on right away he says. The idea of jumping in a lake or swimming pool in the midst of winter was bewildering to some. He recalls needing to explain to people that it was, "something you can do that's wild and crazy and for a good cause." The event grew slowly over several years from the first Polar Plunge being held in Saginaw, to 30 Polar Plunges being held in recent years. The events have soared in popularity and maintain a carnival-like atmosphere, complete with a costume contest for those doing the plunging.

Katz explains that each year, roughly $1 million is raised for Special Olympics Michigan via the Polar Plunges. Plungers, as they are called, register and raise money through pledges. Some plungers register as individuals, some form a team. "Nothing like camaraderie than jumping in cold water with your friends and family, or your co-workers," says Katz. Plungers who raise more than $75 dollars in pledges receive a long-sleeved commemorative t-shirt as a thank you gift.

Half of all money raised for Special Olympics Michigan stays within each area. There are nearly 40 areas in Michigan, made up of one to four counties. Hence, half of all money raised in Belleville will stay in Wayne County, enabling the organization to provide the events to the athletes free of charge. Those competitive events include softball, soccer and bowling. Katz says some people have the misconception that Special Olympics are just for kids. "It's actually for all ages," he says.

The Wayne County Polar Plunge in Belleville will feature an After Splash Bash with food, a silent auction, a 50/50 raffle and announcement of the winners of the costume contest and largest fundraiser.

A free lunch will be provided for all plungers, but a restaurant and cash bar will be available for spectators. The event is free to the public and Katz encourages people to come out and watch. "It's a great winter event to get out of the February winter blues," he adds.

Interested plungers can register in advance on the organization's website, which is preferred, or show up on the day of the event. "You don't have to be on a team, you don't have to have a costume, sometimes people just show up," says Katz. He adds that the day is all about having fun and raising awareness about Special Olympics Michigan and the Special Olympics athletes. Both the organization and the Polar Plunge events allow people with intellectual disabilities to feel included in their communities, and as Katz explains, that it was the norm at one time to treat such individuals as outcasts. 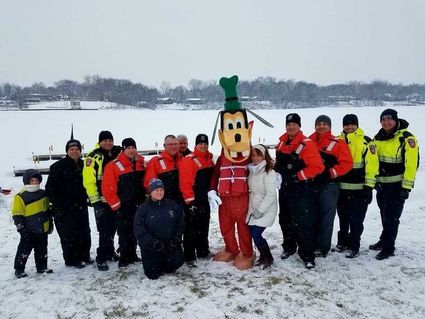 If you would like to donate to any individual or team participating in the Polar Plunge, go to the website, http://www.PlungeMI.com to find a list of Polar Plunge events and teams to which you can pledge a donation. Also being held on February 9 will be Polar Plunges in Greenville, which is northwest of Ionia, Lake City which is outside of Cadillac, and downtown Detroit at the Detroit Winterblast at Campus Martius. Katz will be plunging with his team from MDOC and they plan to be in costumes from the Wizard of Oz. He adds that the event is a great thing for the local community. "It's a lot of fun," he says. "That's why I've been doing it for almost 25 years."

The Belleville Yacht Club is located at 831 East Huron River Road in Belleville. Registration begins at 9:30 a.m., the Parade of Costumes begins at 11:45 and the plunge is at noon.

More information on Special Olympics Michigan and the Polar Plunges being held throughout the state can be found at http://www.somi.org. or at the plunge website listed above.