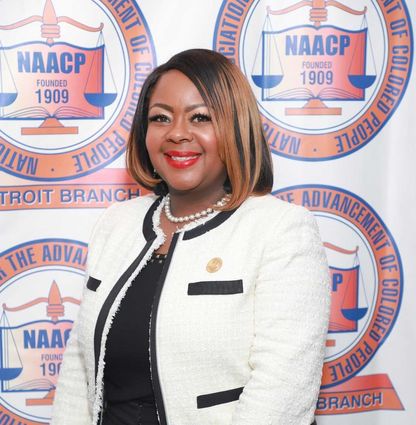 Kamilia Landrum is the new Executive Director for the Detroit NAACP

"Our search committee was appointed in July of 2018." Said Rev. Anthony. "They held several meetings and now the work is completed. Nearly 70 applications were received, locally and nationally. After a review of all the applicants, it was narrowed down to four and of that four, three were interviewed. After much deliberation, conference calls, and discussion, the search committee brought forth a recommendation to our board for the new executive director for the Detroit Branch NAACP.

Today, we wish to announce that the new director, following the likes of former Executive Director's:

Our new Executive Director, as recommended and accepted by the Board is, Ms. Kamilia Landrum."

Kamilia is a child of the NAACP. She was a leader in our Youth Council. She served on the national board of directors for the NAACP. She is also involved in several community organizations. Most recently she organized our Take Your Soles To The Polls campaign for voter registration and mobilization, Back to School initiatives for Detroit Public School students, and our Second Chance Initiative for non-violent offenders seeking to have their records expunged in the criminal justice system.

She has a Bachelor of Applied Science in Business Administration and Management from Florida Agricultural and Mechanical University, and a Master of Public Administration from Wayne State University. She is a proud member of the Delta Sigma Theta Sorority, Inc."