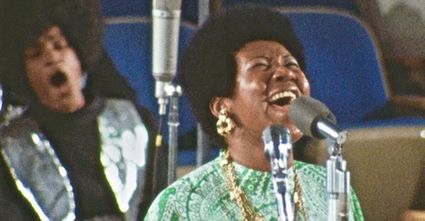 The Aretha Franklin Congressional Gold Medal Act would honor Franklin's role in shaping the nation's culturally and socially relevant discography and highlight her life as an example of how one person's talents can make a difference in the lives of millions of people across the globe.

"Aretha's songs were the soundtrack of my childhood, from listening to 'Mary Don't You Weep,' to standing in the living room dancing to 'Rock Steady' over and over again, to hearing from the Queen herself how lucky I was to be young, gifted and black," said Senator Harris. "Aretha was simply a legend. Her work and impact will be felt for generations to come, and it's long past time Congress honors her with the Congressional Gold Medal."

"Aretha Franklin's voice and soul were truly larger than life," said Senator Stabenow. "Awarding her the Congressional Gold Medal would further celebrate her legacy and recognize her contributions to the arts, civil rights and the City of Detroit. She will never be forgotten."

"Aretha Franklin was a global icon and fierce advocate for civil rights, women's rights and the City of Detroit," said Senator Peters. "Awarding her the Congressional Gold Medal would be an appropriate tribute to a legendary talent who will continue to inspire artists and activists for generations, and I am proud to join my colleagues in this effort to honor the Queen of Soul."

"Aretha Franklin was soul personified and she gave us the gift of her voice, her truth and her unapologetic passion to demand compassion, love and R-E-S-P-E-C-T for women everywhere," said Representative Lawrence. "An iconic entertainer, powerful civil rights leader and a beautiful spirit who I was privileged to call friend. She will be dearly missed, but never forgotten. I am proud to join my colleagues in introducing legislation to honor her legacy with a well-deserved Congressional Gold Medal."

Aretha Franklin's music served as a 1960s call to action that inspired thousands to join civil rights movements and still maintains a social context that resonates across these movements today. Beyond her contributions to music and arts, Franklin was a philanthropic individual who supported causes related to civil rights, human health, and gender equality, in addition to causes within the creative arts.