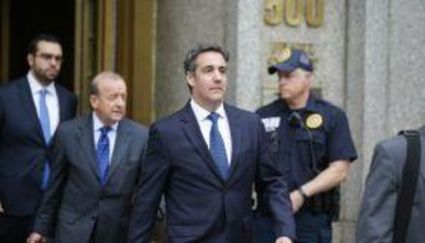 The president's former personal attorney and so-called "handler" was expected to testify Wednesday before Congress to in part confirm what most of America already thinks of Donald Trump: that he is racist. Michael Cohen, who once stood loyally by Trump's side for decades - until he didn't - was set to sit down before the House Committee on Oversight and Reform just weeks before he was scheduled to report to federal prison for several financial crimes, including one linked to the president's 20126 campaign.

And while "the truth" has not been something typically associated with Cohen, who in those remarks admits to lying to Congress the last time he was forced to testify before the legislative body.

"He is a racist," Cohen's remarks say bluntly before going on to provide some examples that might sound familiar to people who have been paying attention to Trump's treatment of anybody who isn't white.

"The country has seen Mr. Trump court white supremacists and bigots. You have heard him call poorer countries 'shitholes.' In private, he is even worse. He once asked me if I could name a country run by a black person that wasn't a 'shithole.' This was when Barack Obama was President of the United States," Cohen's prepared remarks say.

Of course, Trump is on record as having called African and Caribbean nations "shithole countries."

Cohen's comments also add further credence to the belief that Trump routinely questions the intelligence of Black people, something that is a consistent undertone in the president's tweets and public statements.

"While we were once driving through a struggling neighborhood in Chicago, he commented that only black people could live that way," Cohen was expected to say. "And, he told me that black people would never vote for him because they were too stupid."

However, while Cohen was expected to provide Congress with "several documents" that establish the president as a "cheat" and "conman," it didn't seem like he would provide any proof of Trump's racism beyond the above rhetoric that has become all but commonplace since the beginning of his candidacy.

Back in July, Cohen insisted he had dozens and dozens of secretly taped conversations with Trump, igniting suspicions that he surely must have uttered the N-word on the recordings at least once. While federal investigators obtained more than 100 tapes, Cohen's prepared remarks for Wednesday made no mention of them or their contents.

To be clear, while Cohen will be saying things that many people have long agreed with, his audience will undoubtedly greet him with skepticism. The House Committee on Oversight and Reform is chaired by prominent Maryland Rep. Elijah Cummings and its membership include Rep. Alexandria Ocasio-Cortez, the powerful freshman Congresswoman from New York - two prominent anti-Trump voices.

Cohen was sentenced in December to three years in prison for lying to Congress and tax fraud, false statements to a bank and campaign finance violations while he worked for Trump.