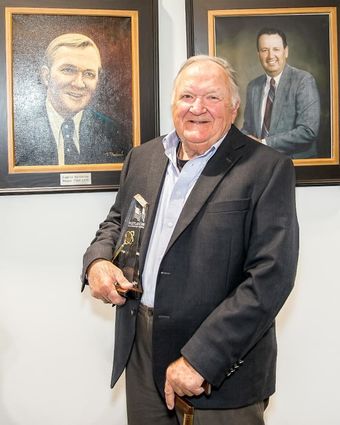 Westland - On Monday, April 1, the Westland City Council adopted a resolution honoring Mayor Gene Mckinney for his service to the City of Westland and its residents by dedicating the Grande Ballroom inside Westland City Hall in his name.

Mayor Gene McKinney was born in Nankin Township, which later became the City of Westland, on June 21, 1935. When elected as Westland's second Mayor at the age of 33, he was the youngest Mayor in the State of Michigan.

McKinney served the City of Westland in the years 1969-1975 and as a member of the Nankin Township Charter Commission, which aimed to transition the community from a township to a city. He worked alongside eight other individuals to write the City Charter, and together, their work helped lay the framework for the policies still used to manage Westland today.

While serving the community, Mckinney worked with other community members and government officials to integrate many enhancements into the Westland community, including:

Establishment of the Historical Commission

Creation of the Housing Commission

Forming the Westland Library Board to begin planning for a library

Worked to rename the Wayne School District to include Westland

Succeeded in development of the Westland Golf Course

Throughout his distinguished career, Mayor Gene McKinney was committed to promoting diversity, inclusivity, and ensuring the satisfaction and well-being of all Westland residents.

McKinney has been proud to call Westland home and he still remains active and involved in the community, having served on the City's 50th Anniversary Committee and volunteering his time and effort for Norwayne's 75th Anniversary.

"Mayor McKinney was a dedicated public servant and remains passionate about making Westland a great place to live," commented Mayor Wild. "We are proud to have his name associated with our Grande Ballroom and look forward to a dedication ceremony in the near future."