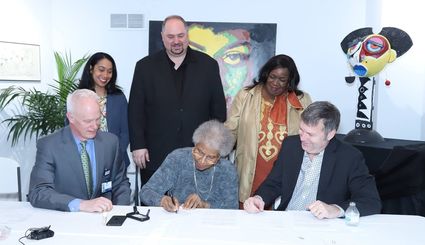 "I am pleased that this long negotiation has come to such a successful conclusion," Robinson said. "History was made again for the second time. It shows how development can be done when neighborhood, business and government leaders sit at the table, respect each other, find common ground and work together. The unwavering and principled leadership of Mildred Robbins and her WGBC team, in partnership with Council Member Mary Sheffield, former Rep. Rose Mary C. Robinson, the Sugar Law Center and representatives from Henry Ford Health System, has been invaluable and our community at large will benefit from this ongoing collaboration and teamwork. This historic private community benefit agreement with Henry Ford Health Systems and long-time residents is already putting more Detroiters to work."

The West Grand Boulevard Community, founded in 2004, is comprised of 29 community organizations, institutions and businesses in the Northwest Goldberg, and West End Detroit communities. In 2014, the WGBC negotiated the first Letter of Understanding with Henry Ford Health Systems around their Cardinal Warehouse facility. With tremendous assistance from then State Representative Rose Mary C. Robinson (D-District 4), it was the first privately negotiated community benefits agreement in the City of Detroit at the time.

Today's signing marks the second privately negotiated Letter of Understanding reached between the West Grand Boulevard Collaborative and Henry Ford Health System. Some of the provisions put forth in the Letter of Understanding relate to supporting place-based workforce development activities for neighborhood residents, designating preferred routes for construction traffic during and environmental mitigation to remediate negative impacts on the neighborhood and its residents.