After Historic and Emotional Win, Tiger Woods to be Awarded Medal of Freedom 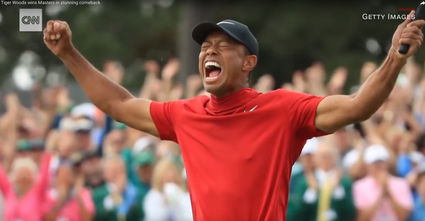 On April 15, President Trump announced he will award championship golfer Tiger Woods with the Presidential Medal of Freedom. Woods and Trump have golfed together in Florida over the years.

Woods won his fifth Masters title and 15th major title overall on April 14. He is now only three major titles away from the record set by golf legend Jack Nicklaus, the sole remaining major golf record left unbroken by Woods.

Woods has come a long way back from health and personal obstacles. In 2010, he and his then wife of six years went through a divorce after he took a break from golf for a year in an attempt to save the marriage. Woods' rank fell to number 58 in November 2011. But he would reach the No.1 position again in March 2013 and May 2014.

Woods underwent back surgery on September 16, 2015. In late March 2016, he announced that he would miss the Masters while he recovering from surgery. Woods also missed the 2014 Masters due to a back pain. "I'm absolutely making progress, and I'm really happy with how far I've come. But I still have no timetable to return to competitive golf," Woods stated at the time.

In 2017, he underwent spinal fusion surgery. He referenced the medical advice he received after his Masters victory saying he was told he may never play golf again. On October 27, 2017, Woods was arrested for driving under the influence. It was widely speculated by sports observers that Woods' career might be over. It wasn't. Woods pled guilty to reckless driving and was put on a diversion program. He then returned to the golf circuit in 2018.

Woods, 43, won his fifth Masters Tournament title at Augusta National on April 14 - winning it for the first time since 2005 - the longest period ever between wins in that tournament.

"Spoke to @TigerWoods to congratulate him on the great victory he had in yesterday's @TheMasters, & to inform him that because of his incredible Success & Comeback in Sports (Golf) and, more importantly, LIFE, I will be presenting him with the PRESIDENTIAL MEDAL OF FREEDOM!" Trump tweeted on April 15.

Lauren Victoria Burke is an independent journalist and writer for NNPA as well as a political analyst and strategist as Principal of Win Digital Media LLC. She may be contacted at [email protected] and on Twitter at @LVBurke