Tyrone Campbell The Man After The War 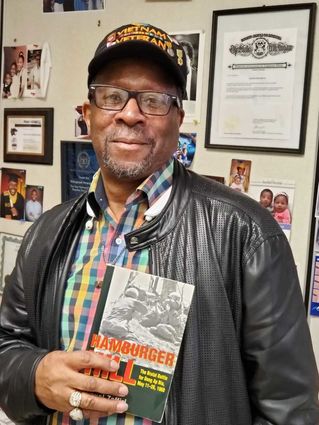 It's always been difficult for civilians to gain a clear understanding of the Vietnam war. American involvement surly transitioned our countries timeline. American view of the government shifted, as well as the economy, voting age changed, and the end to the draft system.

No soldier returned home the same man or woman that left. Others didn't make it home. They have witnessed horrible things, and faced earth shattering decisions as a part of the work day. Most Veterans have a hard time sharing what they went through. But opening up is easier for Tyrone Campbell.

The River Rouge native comes from a time where the community acted as a true village. Race relations around the world did not affect River Rouge the same way. After high school Mr. Campbell signed up for the Army where his intensive training for Vietnam started.

Tyrone had cold feet about going to Vietnam, but with the blessings of his Mother he took responsibility of his assignment which was spent mostly in the jungles. A trip where he didn't set expectations but did his best to survive.

Tyrone Campbell was a young man far from home fighting against younger men in their own backyards. America's lack of intel on Vietnam terrain was detrimental. Viet Cong soldiers tucked away in the jungles, building complex underground structures and finding perfect positions to ambush American soldiers. America's countermeasure, Agent Orange was sprayed to reduce the vegetation and even the score.

The herbicidal warfare killed the jungles in record time; at the risk of gravely affecting the health of soldiers in the vicinity. Skin irritations, miscarriages, psychological symptoms, type 2 diabetes, birth defects in children and cancers such as Hodgkin's disease, prostate cancer and leukemia are all long term effects of Agent Orange contact. Tyrone has watched Agent Orange come out of the planes, and is one of the millions of people who made physical contact with it.

Hollywood and popular culture has used films, books, and television to birth a narrative of American Vietnam influence. Fictional films, Full Metal Jacket and Dead Presidents depict two different stories of Vietnam. The Battle of Hamburger Hill is an event that took place from the 10th to 20th of May 1969. The battle has its own history, hollywood films, books, and documentary films.

"Sp.4 Tyrone Campbell was advancing with his squad on the far right of the 3d Platoon's line when a sniper cut loose at him. Five or six shots kicked up dirt in front of him, and he ran forward and dived behind a large log. There were two men already huddling there. Campbell was turning to see if he knew the men and saw them both wince as bullets hit them. The shot meant for him ricocheted off the top of the log. Out of the corner of his eye, he had spotted the rife flash at the top of a small tree about thirty meters to the left. Campbell flipped his rifle on automatic and emptied an entire 20-round magazine into the tree, then quickly changed magazines and fired again. Leaves fell from the tree like snowflakes, and a second later, the sniper tumbled forward, dangling grotesquely five feet below his perch by a rope he had tied around his waist."

After countless firefights, death, and questioning of their countries motives. Tyrone, and thousands of soldiers returned home. For some, the U.S soil was just as traumatizing as Vietnam.

The narrative circulating from home told that soldiers were dangerous, and unstable drug addicts. In reality; Veterans were suffering from the unknown effects of Agent Orange, and untreated PTSD.

A portion of America turned their backs to the veteran's cries for help. Veterans were criticized by their families, harassed by anti war protesters, and soldiers of color were still treated like they didn't belong on American land.

This made it hard for veterans to open up about their experience. Soldiers who couldn't adjust volunteered for more tours in Vietnam, turned to a life of degeneracy to make ends meet, or even committed suicide.

Tyrone's homecoming was successful due to the support of his family. The real challenge was within himself. Sleep was hard to come by, nightmares were plentiful, and he's suffered from shakes that have been given the name tremors ever since his return. Tyrone made it to River Rouge July 3rd of 1970. The fireworks being set off brought Vietnam to Michigan. He wanted to relax and adjust, but Tyrone never had the chance to collect unemployment. The death of his father caused him to take up a job a Great Lakes Steel.

At seventy, Tyrone Campbell has to live with his history. Nothing was easy about it. They're not as vivid, and not as often, but he still suffers from the nightmares. Tyrone also had to wrestle with the VA for his full benefits, which he's only had for about five years. He hasn't seen anybody he served with since he left Vietnam. But on occasions he meets other Vietnam veterans. They don't bring up the war in conversation, the young men just sit back and discuss life as it is.

Mr. Campbell now says he's alright with everything. What still bothers him the most is how the veterans were treated after the war. His children and grandchildren keep him on his toes. Thank you Tyrone Campbell. The country, and the city of River Rouge appreciates your hard work and sacrifices.

Xavier Jones - How do you feel about Vietnam Veterans not getting their proper respect?

Tyrone Campbell - It wasn't right! A lot of us are still trying to get what we deserve! Soldiers from other wars came home with

the whole package. They hid some things from us that we qualified for, but most of the guys my age or older from Vietnam died before they had a chance to collect their benefits.

Xavier Jones - How can you describe your status when you made it home?

Tyrone Campbell - I was still having nightmares, not sleeping much. My Mother wouldn't come in the room to wake me up, she'd throw a shoe in the room. Sometimes I'll wake up under the bed becauses I had a dream I was back.

Xavier Jones - Did the Government or VA rush to provide you the proper healing resources?

Tyrone Campbell - Not really. At the time nobody addressed our condition as PTSD. They didn't address it as anything because they didn't know what it was.

Xavier Jones - Was Vietnam a different experience for you being a black man?

Tyrone Campbell - It was different but it wasn't the biggest issue. It was something like home, we wanted to survive. The black soldiers always stuck together, even when they didn't know each other. While we were in the field pamphlets would fall from the sky that said, "Black man, why are you over here fighting and your war is at home?" and Ho Chi Minh claiming, "If you give me all the black men the war will be over tomorrow.". The Vietnamese people went out their way to genuinely accommodate black soldiers, opposed to catering to white soldiers for a reward. I also met Vietnamese women with kinky hair and African features. That helped me connect Vietnam as a country and it's people on a different level.

Xavier Jones - Was being a black man ever a problem?

Tyrone Campbell - Only when rank was brought into the mix. Young, college educated white guys come over as Lieutenants and ignore the six months of survival we've already been through.

Some of them broke those survival rules and made it harder for us. It got so bad some of them had bounties on their heads.

Xavier Jones - What helped you heal as much as you did? 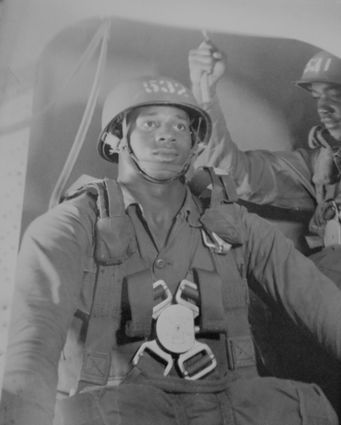 Tyrone Campbell prepares to jump out of the plane

Tyrone Campbell - The people at home still treated me like I was Tyrone, and my family let me be. I never had problems with holding things in and expressing myself. Some guys don't want to talk about it, holding it in isn't any better. What really helped was opening up about my experience. Letting it out when I was ready. I've always wanted to go back to Vietnam to visit. My family helps, they help me laugh it. My kids always tease me, "If you want a milkshake give this to your Daddy he'll make it right for you." If you don't laugh about it the grief will consume you. You don't heal fully. That's impossible, you just learn better ways to live.