Congress, Coffee and Conversation with Congresswoman Rashida Tlaib in Romulus 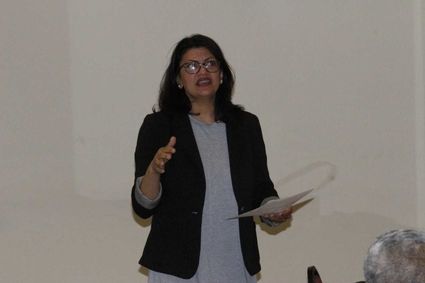 Congresswoman Rashida Tlaib of Michigan's 13th District knows the importance of keeping in touch with those who elected her to serve in Washington, D.C. A native of Detroit and serving her first term as a member of the United States House of Representatives, Tlaib says she repeatedly has heard voters throughout her district asking, "Don't forget about us, don't just do Detroit-centered issues."

In her short time as a congresswoman, Tlaib has met with the mayor of every city within her district and adds, "Even though I was born and raised in Detroit and that's where I live, I hear you, and I don't want to have anyone feel left out."

On Monday morning, April 15, Tlaib held a Congress, Coffee, and Conversation Meeting in Romulus. Tlaib addressed the nearly 30 voters in attendance on the work she has been doing in Washington. While she emphasized her passion for giving Michigan residents some relief on auto insurance rates, she conceded, "As a Federal member of Congress, it's very limited, what I can do to kind of, change things that are happening at the state level." Nevertheless, Tlaib explained her work on the U.S. House Committee on Financial Services, which is exploring a curious link between a person's credit score and the amount of auto insurance they pay.

Tlaib also discussed issues with air quality in Wayne County, a concern she says she hears about frequently from voters. She cited statistics which indicate Wayne County has the highest rates of asthma in children and adults. Additionally, schools in her district, which includes the cities of River Rouge, Romulus, Ecorse, and portions of Detroit and Dearborn Heights, encounter more student absences due to asthma-related issues.

Tlaib lamented a sense of a lack of urgency in Washington regarding prescription drug prices and healthcare, but encouraged attendees that her work on these issues and more is ongoing. She interacted with voters and also discussed issues of importance to them. "I always say government is about people; it has to work for us," she added.

to assist residents in accessing services they may need. Such services include help in preventing utility shut offs, services for veterans, free legal services, and services for senior citizens, to name a few.

Tlaib will host future Congress, Coffee, and Conversation Events throughout the district. On Friday, May 3, one will be held in Detroit from 10 a.m. to Noon at the Town Hall Caffee, located at 19180 Grand River Avenue. On Thursday, May 30, another will be held in Wayne from 6 to 8 p.m. at Karma Coffee Shop, located at 35634 Michigan Avenue. 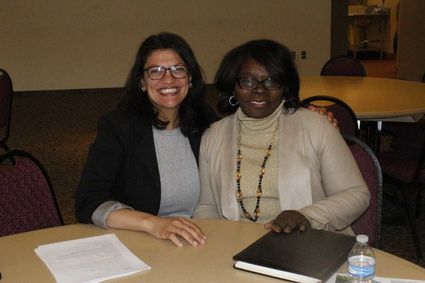 More information on these and other upcoming events, locations of Neighborhood Service Centers and on Rashida Tlaib's work in Washington can be found at http://www.tlaib.house.gov. or by calling 313-203-7540.