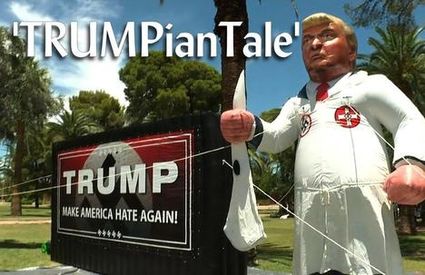 Back in early 2016, might Hollywood have ever accepted this far-fetched 'TRUMPian Tale' for a movie?

Let us reflect for a moment that there ac-

tually has dwelled in our dis-United States a psycho-pathologically narcissistic, infantile,

draft-dodging liar named Trump whose Wharton professor once pronounced him "the dumbest student I ever had," and who was given $400 million by his father--a former Ku Klux Klansman--to get started in business. This racist, ignorant, amorally sinister son of an old Klansman accumulates a billion-dollar real-estate empire via extensive double-dealing in collaboration with Russian underworld moguls, excludes black tenant-applicants from his properties, and presently loses all of his holdings due to his own arrogant mismanagement. He is saved from bankruptcy by Russian mafiosi via money-laundering and other nefarious schemes, including a bogus "school" and a beauty contest in Moscow, where he has had underhanded interchanges throughout four previous decades, and where it's rumored that his copulations with beauty contestants were secretly videotaped to entrap him through this and his other

covert activities into potential blackmail. He is also alleged to

proclaimed "genius" runs for president himself, using funds from his foundation illegally, and trumpeting a paroxysm of coarse namecalling against opponents. He is helped by minions whom he orders to pay off two of his former concubines for their silence on the eve of the election--and helped as well by disinformation sneaked to voters by the Kremlin--help with which the 72-year-old candidate eagerly conspires.

With a platform based on racial and religious divisiveness and a disavowal of the science of global warming, he steals the presidency despite the public having heard a tape wherein he brags about grabbing women's vaginas. Still, he does lose the popular vote to the spouse of a former president, that lady having thus become the preferred president but remaining unseated by virtue of the treacherous Elec-

When it becomes clear that in the process this treasonous egomaniac has obstructed justice in collusion with an adversarial government, he accelerates a tweeted stream of falsehoods, taking credit where it isn't due and dodging blame where it is, lying to the American people 9,000 times, and hiring and firing mostly inept, fawning White House staff in a revolving-door procession--one of his more competent Cabinet members having correctly labeled him an effing moron and another having pronounced him an idiot.

He appoints family members to key positions and continues, via them, to engage in under-the-table deal making with oli-

garchic Saudis and Russians, and he cozies up to a female Chinese national who runs a slave prostitution ring alleged to have serviced his crony, the owner of an NFL team. When a Special-Counsel investigation and state prosecutors close in on him, he attempts to silence patriots who've spoken out against his fascistic bullying, including retired generals, his fired FBI director, an ex-CIA director, and other FBI/CIA officials and ruthlessly revokes

Manhattan, Hawaii, and the Netherlands.

After having closed the government for a month over his fake Mexican-border emergency (against the protests of Democrats but with the craven complicity of Republicans) and after shutting down a TV show that ridiculed him, he gains the

backing of paramilitary hate groups, declares martial law in a Hitlerian coup, and commandeers the Army and Air Force, the free media, the schools, large corporations, and the courts. He has himself named President-for-Life, imprisons dissenters, abolishes Congress, outlaws trade unions, rescinds the citizenship of African-Americans, Hispanics, Muslims, and most Jews, and invades Canada and Mexico. He brutally quashesa brief and

A Venezuelan-American Marine whose asylum-seeking cousin was separated from her children and deported tries to kill him. Terrified, he triples his security detail and becomes reclusive. He has his presidential predecessor and other rebels shot--along with his would-be assassin--and their executions televised. He thereupon declares war on China, Iran, North Korea, and America's former European allies and bombs them to near-annihilation. Some still-intact military forces in China and North Korea retaliate, and the false president perishes in the resultant nuclear Armageddon along with the populations of Washington, D.C., New York, Los Angeles, and Detroit. The scant surviving Americans, Chinese, and Iranians--plus the traitorous Trump's puppeteer Putin and his countrymen and a few thousand western Europeans and all additional remaining humans, other mammals, birds, and most sea creatures--suffer slower deaths beneath the radiation fallout of a long nuclear winter. Eons later, hardy surviving cockroaches on the desolated planet evolve into higher life forms and eventually repeat the now-extinct humans' suicidal cycle. So--could this 'TRUMPian Tale' ever actually happen in our democracy?

Never forget that something eerily similar did happen in the democratic Weimar Republic after the diabolically genocidal megalomaniac Hitler was elected, and the "good Germans" blindly followed him into