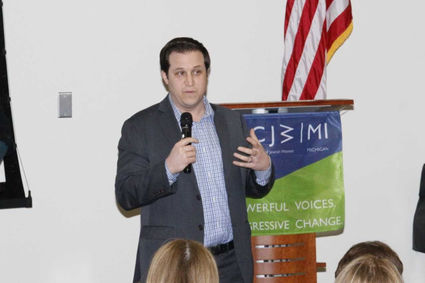 Kasky described the stark distinction between the leadership at the National Rifle Association (NRA) and its members. "The NRA, which is essentially, in fact, the gun manufacturer's association of America, they lobby for and represent the gun manufacturers," Kasky told the roughly 60 people in attendance. He suggested that it is, therefore, in their client's and their own best interest to increase gun sales in the country, adding that their focus is on profits. NRA's leadership opposes all gun safety legislation. "Ask yourself, 'Why would the NRA oppose laws that keep guns out of the hands of the mentally ill, or the convicted violent?'" he told the audience.

He said the NRA has changed over the decades, from being about sport and hunting safety, to the organization it has become today, trying to equate gun ownership with masculinity and patriotism. Kasky went on to say that most NRA members agree that the nation should have reasonable background checks for gun purchasers, and that guns ought to be kept out of the hands of mentally ill, irresponsible, abusive or violent people.

Kasky's organization, Families vs. Assault Rifles, was founded by parents following the Parkland Shooting last year. The organization's mission is to prevent mass shootings which occur when civilians have access to military grade weapons. The PAC supports legislators whose policies promote efforts to stop gun violence and easy accessibility to assault weapons.

Linda Brundage of MCPGV became involved in the movement to stop gun violence shortly after the Sandy Hook shooting in 2012. She emphasized that gun violence is about more than mass shootings, adding that nearly two-thirds of gun deaths in the U.S. are attributed to suicide. "I'd like to remind everyone today that we are here talking about all gun violence deaths in our country. Mass shootings get all the press, but we are also remembering the much larger number of daily grinding deaths happening in all our communities: mass shootings, homicides, suicides and unintentional shootings," she said.

Brundage added that people who have been joining the gun violence prevention movement in recent years understand the importance of the Second Amendment. In Michigan, she said, hunting is a popular tradition, and that no one is attempting to take anyone else's gun away. 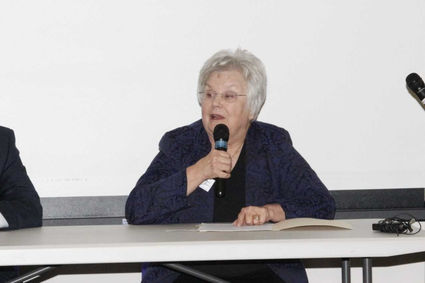 Linda Brundage of the Michigan Coalition to Prevent Gun Violence speaks at a forum in Farmington.

State Representative Robert Wittenberg, whose district includes Berkley, Ferndale and Oak Park, is founder and chair of the state's Gun Violence Prevention Caucus. He has proposed HB 4283, which is an Extreme Risk Protection Order, or ERPO. The proposed legislation seeks to allow, through court order, the temporary seizure of firearms from a person that poses a "significant risk of injury to themselves or others. " The order would also prevent such individuals from purchasing firearms. Wittenberg calls the proposed legislation a mechanism to prevent a preventable tragedy, as in other cases where concerned family members called police about an individual who posed a risk, yet the police had no authority to act or seize the individual's gun. Such a law is on the books in 14 states currently. The law requires the authority of a judge and does not allow for police to confiscate anyone's guns. "No one is trying to stop someone who is rightfully allowed to get a weapon," Wittenberg added.

Wittenberg encouraged attendees of the forum to call their state legislators and ask them to support the bill and work toward getting the bill a hearing on the house floor. The current Speaker of the State House has little interest in allowing the bill to be read.