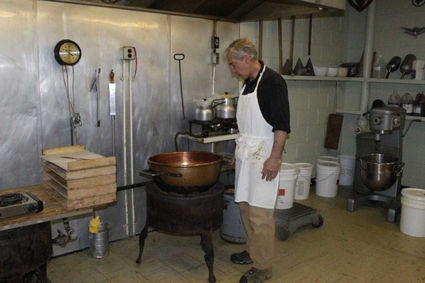 Nick Corden demonstrates some of the machinery that assist him in producing delicious chocolates.

The unassuming little store front on Michigan Avenue in Inkster houses a long and storied history most know little about. The shop was built in the late 1960s by Evans Corden to house his confectionary shop. It was intended as a second location of the Senate Sweet Shop, located farther east on Michigan Avenue in Detroit. It was at this location the story begins in 1918.

It was Grandfather Samuel Cordon and his brother Gus Corden who started things. Samuel Corden had come to America from Greece early in the century, with the dream of starting his own business, and both men landed a job working with a candy maker in Chicago. The pair later took what they learned and moved to Detroit and opened their own confectionary shop on Michigan Avenue, the Senate Sweet Shop.

The family business thrived. Samuel's son, Evans, had made an attempt at a career as an accountant, but candy making was in his blood. Evans worked alongside his father, having acquired candy making training. Grandfather Corden eventually retired, and the business was in Evans' hands. Shortly thereafter, the younger Corden decided to open a second candy shop.

The Inkster location featured the family name, however, and was called Corden's Candy Carousel. Around 1970, Evans Corden moved all operations to the Inkster shop and closed the Senate Sweet Shop. The business continued to thrive and Evans Corden was able to put his four sons through college. Son Nick Corden worked in the family shop on weekends and evenings. Today, it is Nick Corden, third generation chocolatier, who runs the family business.

Corden initially went to law school and planned on a career as an attorney. He did so for 25 years, giving it up when his mother passed away around 2008. He went to work with his father full-time. "I think he enjoyed my company," Corden recalls, "and teaching me things that I thought I knew, but didn't know." Evans Corden passed away in 2015. "I wasn't completely sure if I was going to continue it," Corden says of his effort to run the business himself. "But I was so close to 100 years that I had to get it there."

Corden still makes everything from scratch, the way his father taught him. He has three employees, yet does not rely on advertising, a web page or internet orders. Word of mouth and an existing loyal client base keep the shop running. Corden explains the chocolate season runs similar to a school year, from fall through late spring, when holidays like Christmas, Valentine's Day and Easter are prime times for selling chocolate. 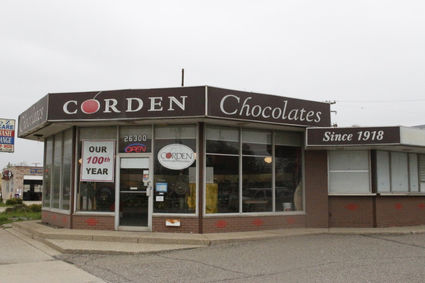 The little chocolate shop in Inkster

This past season, Corden's Candy celebrated 100 years in business. Corden says his sons are interested in taking over the business, but he wants them to try something else with their lives first before deciding on the life of a candy maker. "It's been harder, but like anything that's hard, it's more rewarding when the work is hard and it comes out okay. I've enjoyed it," he says. "I probably could have had a few more bucks in the bank if I had continued being a lawyer, but I think I made the right choice."

Corden's Chocolates will be closing for the season at the end of the business day on Wednesday, May 15. Hours for the shop are Monday through Friday 11 a.m. to 5 p.m., and Saturday 11 a.m. to 4 p.m. so stop in and get the perfect Mothers' Day gift. The shop is located at 26300 Michigan Avenue, just east of John Daly Street in Inkster. Corden says he plans to reopen in mid-September.