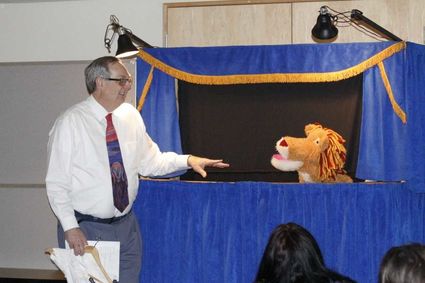 Librarian Jim Moyer talks with Sebastian the Lion at the Caroline Kennedy Library.

The world of make-believe is a land of vast possibilities. Jim Moyer, Youth Services Librarian for the city of Dearborn Heights, knows that make-believe and education can sometimes go hand in hand. Moyer, together with Adult Services Librarian, Robert Butler, have created the Animal Capers Puppet Show, which is currently engaging young visitors to the city's public libraries.

This spring's installation of the puppet show is entitled, 'Animals a Go-Go-Gone,' and introduces youngsters to the serious idea of extinction in a fun and lighthearted way. Moyer is all seriousness, standing in front of the puppet booth, bantering with the puppet characters and interacting with the audience. It's all great fun as Moyer chats it up with the dim-witted Forrest the Wolf, Sebastian the Lion, and Tiberious T. Tiger, who is a compulsive inventor.

This time around Tiberious T. Tiger has traveled back in time in his time machine and discovered that many animals currently on the planet will be extinct in 100 years. The events which follow captivate the audience and induce plenty of laughter.

Butler writes the scripts the pair uses, and during rehearsals, the story is shuffled and kid-friendly humor is inserted. Butler has been a puppeteer for 23 years and when he came up the idea for Animal Capers, he went to Moyer. "I dragged him into it," he says with a smile.

"He wanted to do puppet shows and he needs a straight man, you know, to be in the front," laughs Moyer. "It is fun to see the kids having a good time," he adds.

Animal Capers presents two shows each year, one in the spring and one in the fall, with Butler providing the puppets with personalities and voices. "These puppet shows are a lot harder for Rob than they are for me," says Moyer. "I don't need to rehearse; I just stand up there and react to what they're doing pretty much. It's funny."

It may be plenty of work, but Butler says he loves it. "We're her to educate and to entertain," says Butler. He adds that what he finds most satisfying is "hearing the laughter and enjoyment from the audience."

Animal Capers will be presenting 'Animals a Go-Go-Gone' once again at the Caroline Kennedy Library, located at 24590 George Avenue, east of Telegraph, on Tuesday, May 21. The free show will run from 7

to 8 p.m. and is open to all ages. For more information see the library's website at http://www.dhcl.michlibrary.org/youth.